Skimming over the Indian Ocean towards the gorgeous islands of Mozambique is like entering a kid’s over-imaginative coloring book.

Water in a dozen shades of blue washes over the crisp white sand backed by vivid green palm trees. Your camera works overtime to capture some of the world’s most stunning islands owned by one of the world’s poorest countries.

Mozambique on the east coast of Africa has numerous islands, with the most tourist-friendly being the Quirimbas to the north and Bazaruto Archipelago further south.

Don’t ask me which I prefer – I’d go back to any of them in an instant.

The islands are a very gentle introduction to Africa, with wonderful year-round sunshine, a laid back atmosphere, fine food and friendly locals, but without the hustle, bustle and hassle you sometimes find on the mainland. They’re perfect for a few days of luxurious downtime, ideally before or after a game-viewing safari in neighboring Tanzania, South Africa or Kenya. But if scuba diving is your hobby, these are brilliant destinations in their own right. 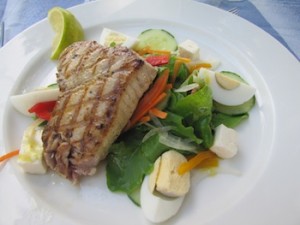 The freshest fish at Quilalea!

This tiny island looks stunning from the air, as you zip in by helicopter from the mainland’s international airport at Pemba. It’s just as gorgeous when you’re on the ground. Quilalea sits in the Quirimbas Archipelago, a marine sanctuary of 32 islands, most only inhabited by birds, monitor lizards, a few monkeys, and astonishingly huge and ancient baobab trees.

It’s owned by South African politician Tokyo Sexwale, who’s now running for the presidency of FIFA, the international soccer organization. But watersports, not soccer, are the attraction here. It’s uninhabited except for Sexwale’s luxurious lodge with nine villas run by Azura Retreats.

The managers Leon Joubert and Claudia Pellarini-Joubert are deep-sea divers and underwater photography experts who previously ran a diving resort in the Bahamas. They tell wonderful stories of filming for National Geographic and the Hollywood movies Poseidon and After The Sunset. If you want to improve your underwater photography, they’ll be delighted to help. 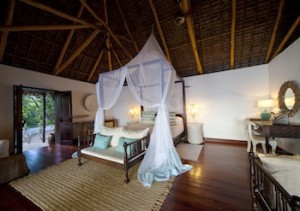 A room at Azura Quilalea

The islands have excellent reefs, and coral runs right in front of Quilalea’s main beach just a few steps into the ocean. You can kayak through mangrove swamps, have a spa treatment or just laze around between meals, when you’ll be served brilliantly cooked seafood and other local treats. The 5-star lodges are beautifully furnished, and have wooden decks leading to your own private beach. 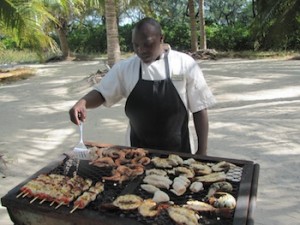 A beach barbeque at Anantara Medjumbe

I felt faintly ridiculous as I locked my laptop, money and passport into the electronic safe, then realized the door to my beach villa didn’t have a key. The only people on this tiny island are here to look after you, not to rifle through your undies in search of hidden treasure. The mental adjustment came as a relief, and I unlocked the safe and left the villa doors wide open to the warm ocean breeze.

Medjumbe is another island in the Quirimbas, and the only buildings are the Anantara Medjumbe Island Resort & Spa. Guests stay in thatched villas discreetly surrounded by foliage and boasting their own beach front.

The main building is a lovely wooden creation with a tepid swimming pool on a deck facing the ocean, a long terrace where meals are served and stairs to a secluded library below the roof trusses. The spa is in another thatched hut, lit by candles and scented by oils. 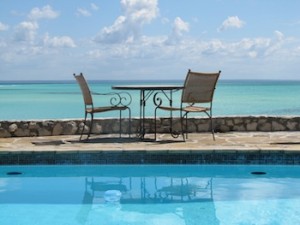 The view from the pool

The best snorkeling is a speedboat ride away and the sun heats the sea to 28ºC (82ºF) even in winter. Flamboyant fish are clowning around in such exuberant colors that I start to giggle, despite the risk of water down my snorkel.

For a day trip head to Quissanga island, when the boatmen double up as the barman and chef, grilling a fanfare of prawns, crayfish, tuna and meat kebabs. Leave room for the delicious Pasteis de Nata, the Portuguese version of egg custard. Medjumbe’s food is fabulous and impeccably presented, with lobster available for every meal including breakfast.
Anantara Medjumbe 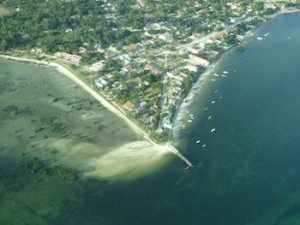 Coming in to land at Pemba

The nearest mainland town is Pemba, which I’d call ‘interesting’ rather than attractive. It has the air of a town waiting for a revival that will hopefully come from oil and mineral mining being developed in the region.

The Avani Pemba Beach Hotel & Spa is the best place in town, and a handy base if you want to experience mainland Mozambique. The guest relations manager can show you around town and take you to the lively African market. The hotel has an infinity pool by the beach, a gym, spacious bedrooms, and a restaurant on a wide sunny terrace.
www.avanihotels.com/pemba 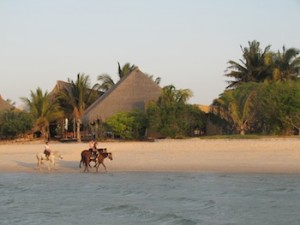 Much further south you’ll find the Bazaruto Archipelago, which broke away from the mainland way back in ancient history. Azura Benguerra Resort on Benguerra Island has 18 villas with divine décor and the food so delicious that you lose your beach–ready body. I went during a rare stormy period so watersports were off, but that gave me chance to enjoy the luxurious villa, have a massage, and take an island tour where you learn about the medicinal nature of the plants and visit a school supported by the lodge. There are 350 kids to six teachers and two classrooms, so the kids attend in shifts and their teachers deserve medals.

Downtime also gave me chance to challenge all the barmen to tsoro, a game of strategy played on a carved wooden board using pebbles or seedpods.

Guests each have a host to look after their needs, but what more could you need than your own strip of beach, a deck with a small pool and his ‘n hers outdoor showers. It’s an eco-friendly lodge with its own generator and water treatment plant as befits a property in a pristine marine national park. Activities include diving and scuba courses, snorkeling, horseback riding, and dhow sunset cruises. 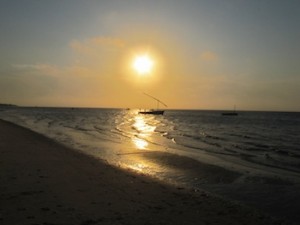 Another fine day ends at Benguerra

You reach Benguerra by helicopter from Vilanculos airport on the mainland.

Since Mozambique’s coastline spans more than 1000km (620 miles) and Bazaruto and the Quirimbas archipelagos are at opposite ends, why not try a land trip between the two. That way you’ll get to experience the real Africa, then revel in the more luxurious version before and after.

About the Author: Lesley Stones 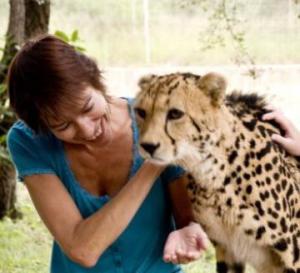 Lesley Stones is a former Brit who is now proudly South African. She started her career by reviewing rock bands for a national UK music paper, then worked for various newspapers before spending four fun-filled years in Cairo, where she ended up editing a technology magazine. A follow-the-sun policy took her to South Africa, where she became the Information Technology Editor for Business Day. After 12 years with the paper Lesley quit to go freelance, specialising in travel and leisure writing and being opinionated about life in general. She writes in a quirky, humorous style and her absolute passions are travel, theatre, the cinema, wining and dining. http://www.lesleystones.co.za