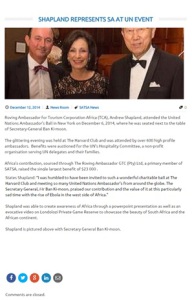 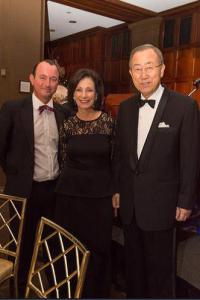 Roving Ambassador for Tourism Corporation Africa (TCA), Andrew Shapland, attended the United Nations Ambassador’s Ball in New York on December 6, 2014, where he was seated next to the table of Secretary-General Ban Ki-moon.

The glittering evening was held at The Harvard Club and was attended by over 600 high profile ambassadors.  Benefits were auctioned for the UN’s Hospitality Committee, a non-profit organisation serving UN delegates and their families.

States Shapland: “I was humbled to have been invited to such a wonderful charitable ball at The Harvard Club and meeting so many United Nations Ambassador’s from around the globe. The Secretary General, Mr Ban Ki-moon, praised our contribution and the value of it at this particularly sad time with the rise of Ebola in the west side of Africa.”

Shapland was able to create awareness of Africa through a powerpoint presentation as well as an evocative video on Londolozi Private Game Reserve to showcase the beauty of South Africa and the African continent.

Shapland is pictured above with Secretary General Ban Ki-moon.