The Karoo doesn’t generally engender visions of eco-systems alive with animals and plants, but that is just what you’ll find – thanks in part to the tireless work of those who have a deep passion for rehabilitating large swathes of this land.

Graaff-Reinet’s Valley of Desolation couldn’t be any less like its name suggests. Set in the heart of the Camdeboo National Park, perhaps a more apt name would be the Valley of Diversity, based simply  on the staggering amount of fauna and flora you will find here. Twitchers have in excess of 200 bird species, including Kori bustards and Black eagles, to keep their binoculars glued to their face Flora fundis will be spoilt with over 300 plant species, while the rest of us can still be entertained with the possibility of spotting a healthy selection of animals, including the endangered Cape Mountain Zebra and a host of different antelope species.

Visitors should also be sure to drive slowly as they enter the park, not only to enjoy its spectacular views, but because there is a good chance the odd leopard tortoise may be making its slow and steady way across the tarmac.
Should you not spot your fair share of animals, fear not, because the park’s main 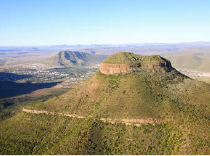 attraction – the aforementioned valley – is impossible to miss . . . or to forget. Think towering dolerite columns of rock rising up 100 or so metres from the desert floor, clustered together like a giant’s game of hopscotch or stepping stones, created and weathered over the last 100 million years. It’s little wonder that it was declared a National Monument of geological and scenic significance as far back as in 1939.
As you stand at the look-out point, and the setting sun emblazons the columns in warm shades of ochre, with the plains of the Camdeboo stretching out in the distance, it is hard not to feel an almost spiritual sense of awe at the wonder of nature. Others have clearly felt it too, as its other – more appropriate – name, “The Cathedral of the Mountains”, clearly attests to. Andrew and David McNaughton from Karoo Connections (karooconnections.co.za) offer fascinating tours not only to The Valley of Desolation, but also in and around Graaff- Reinet and the Great Karoo. 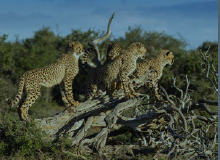 If anywhere in this part of the Eastern Cape deserved the name of the Valley of Desolation, it was perhaps the area that now makes up the Samara Private Game Reserve – the area as it stood 20 years ago, that is. Once a collection of sheep and cattle farms which had progressively eroded the land and eradicated much of its natural fauna and flora, its saving grace was when the Tompkins family bought one of these farms two decades ago. Since then they have progressively added properties to create the 28,000-hectare reserve, and have worked tirelessly to rehabilitate the land and reintroduce indigenous species. It has been a long and complicated task – which continues to this day – but also one marked with many successes.

In 2004, with the reintroduction of three individuals, cheetah once again roamed the plains of the Karoo for the first time in over 130 years. One of them, Sibella, was instrumental in spear-heading the reserve’s cheetah conservation programme by rearing a virtually unprecedented 19 cubs before her death at the ripe old age of 14. One of her cubs, Chilli, currently has four cubs of her own, and it was a very special experience to be able to track this little family group and – when we finally found them – to see the four cubs gorging themselves on a large kudu that Chilli had managed to take down earlier that morning. This kind of large prey is unusual for cheetahs to kill, but in the absence of other large predators, the cheetah in the reserve have quickly honed their skills to become apex predators. This may change later this year, though, with the introduction of the reserve’s first pride of lions. This is a Big Five reintroduction that follows closely on the heels of a herd of elephants that were introduced to Samara last year. Both may come as a bit of a shock to the cheetah population, but with each re-introduction, Samara gets closer to returning the land to what it once was – a land teeming with plants and animals, where the roar of the lion and the trumpeting of elephant were not unusual sounds in the soundtrack of life here.
Perhaps the best way to truly appreciate Perhaps the best way to truly appreciate the grand scale of Samara’s work in this regard is to take a helicopter ride with FlyKaroo Air Services (www.flykaroo.co.za), which operate out of Graaff-Reinet. As you soar over green carpeted plains and mountains, herds of wildebeest at times racing below you, it is not hard to imagine just what this area looked like before the settlers arrived here in the 19th century.

What you wouldn’t have found here in 1870, though, is a fully decked out lunch perched on one of the reserve’s hilltops, complete with tables and chairs,  silverware and champagne. But then, no one minds making an exception to this as you toast the reserve’s exemplary work, and your luck at being able to witness it. 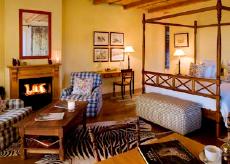 A LAND RECLAIMED BY NATURE

Much like Samara, Kwandwe Private Game Reserve – also in the Eastern Cape, near Grahamstown – also started out as agricultural land. Encompassing 22,000 hectares of diverse landscape, including vegetated mountain areas, open Karoid plains, euphorbia forests and thicket vegetation, this land – once a collection of farms – had been exhausted by goat and ostrich farming.
But now – just over a decade later and thanks to the owners’ rehabilitation efforts – it is lush with indigenous vegetation and teeming with wildlife. This includes the Big Five, as well as cheetah, antelope, giraffe, zebra and a huge variety of birds – including the endangered Blue Crane, from which the
reserve takes its name.
Those used to the bushveld game viewing that characterises the large national
parks in the North of the country will be entranced by the landscape here, which is as green and open as the bushveld is often dry, and with seemingly impenetrable vegetation. Euphorbia trees extend their bright green fingers into the sky, while flowering bushes and grasses add an aromatic scent to the air as you explore the reserve on open topped game viewing vehicles. And for once, game viewing really is virtually guaranteed here, as the reserve’s
many open plains mean that you have great chances of spotting antelope, ellies and many of the big cats – especially cheetah, whose hunting style is best suited to this kind of open terrain – unimpeded by tall savannah-type grass. 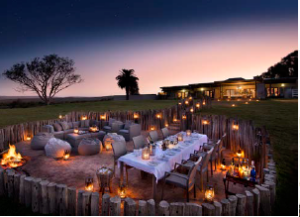 Those who thrill at seeing animals a little out of the ordinary will also be spoilt for choice here, where drives – particularly night ones – often deliver bucket-list encounters with the likes of bat-eared foxes, red rock rabbits, aardwolves and, if you’re very lucky, even the elusive aardvark, making this – and many other areas of the Great Karoo – veritable Edens of the Eastern Cape. 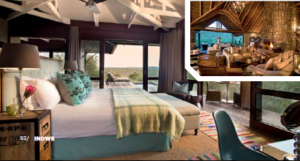