Nadine Dryer finds a constantly unfolding drama of creatures in the Serengeti, in northern Tanzani

The warthog popped out of his burrow and glared at the riffraff squatting on his lawn. Real estate was at a premium and there were plenty of johnny-comelatelies trespassing this morning. The arrivistes had turned up on his doorstep on their annual vacation to this neck of the woods. Wildebeest. Thousands and thousands of blasted wildebeest. And, as if these trumped-up gnus weren ’t trouble enough, there were plenty of zebra and other antelope tagging along. Visibly unimpressed by the intruders, the warthog glared at his surrounds and promptly bolted back down his hole for some RnR. Well, I do love warthogs, irritable or not, but at this point the snouted one and I had to agree to disagree. He was irascible; I was in awe. He was crabby; I was overcome by a sense of wonder at the sheer numbers surrounding me. This wildebeest pow-wow was taking place in the northern part of the Serengeti and there I was, in the thick of the great migration. This phenomenon is the largest movement of mammals on Earth and on the bucket list of any lover of the African wild. It takes place in the Serengeti in northern Tanzania and crosses over to the adjoining Maasai Mara in the southwest of Kenya, as antelope migrate in a cyclical movement in search of rain and food. 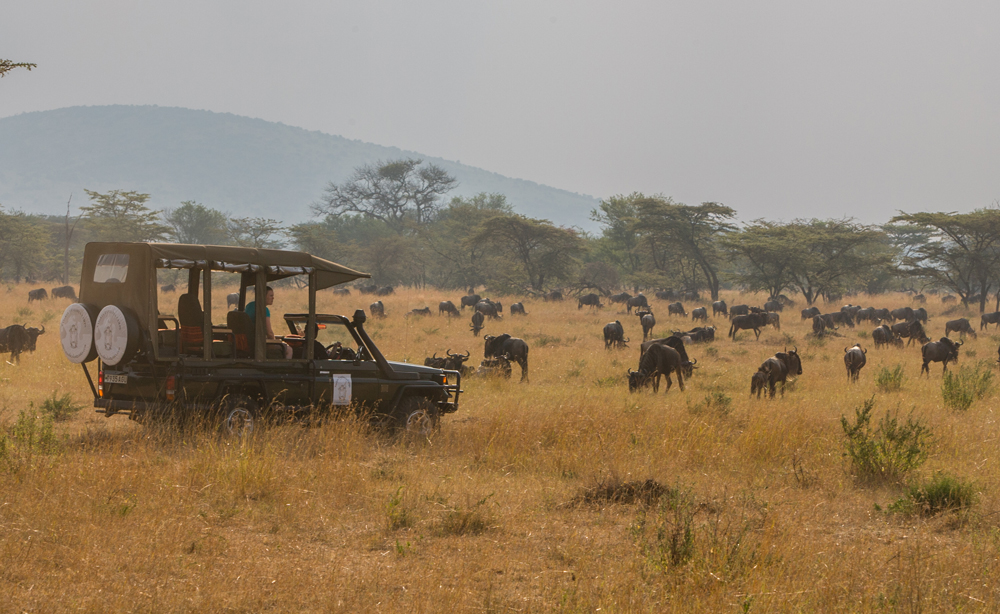 As somebody who is mad about the bush, I’ve visited the Greater Kruger many times. Our beloved flagship game reserve has some of the most spectacular scenery on the planet, with its wide sand rivers and majestic Lowveld trees. It’s also fairly common to see the Big Five in a weekend. The Serengeti, on the other hand, is world-renowned for its endless plains and staggering numbers of game. The figures might vary from year to year, but about 1.5m wildebeest, 200,000 zebra and hundreds of thousands of other antelope make the trek together. The African proverb says: “If you want to go fast, go alone. If you want to go far, go together.” Obviously, they’re all on the same WhatsApp group. I had been invited to stay at Kaskaz Mara Camp, in the north of the Serengeti, by its parent company Nasikia Camps. I landed on Kogatende Airstrip on a flight from Arusha and the safari began. No sooner had I thrown my luggage on the back of the game vehicle than we started seeing herds of game. “Serengeti ”m ean s endless plains in Maasai, and they stretched far into the distance. Kaskaz Mara Camp is ideally situated in a thicket, close to the Mara River off a private road and removed from the tourist throng. A breeze blows through my roomy tent with its draped roof fit for an Arabian princess. After a quick lunch under the trees, it’s time to hop onto the vehicle for yet more game viewing. 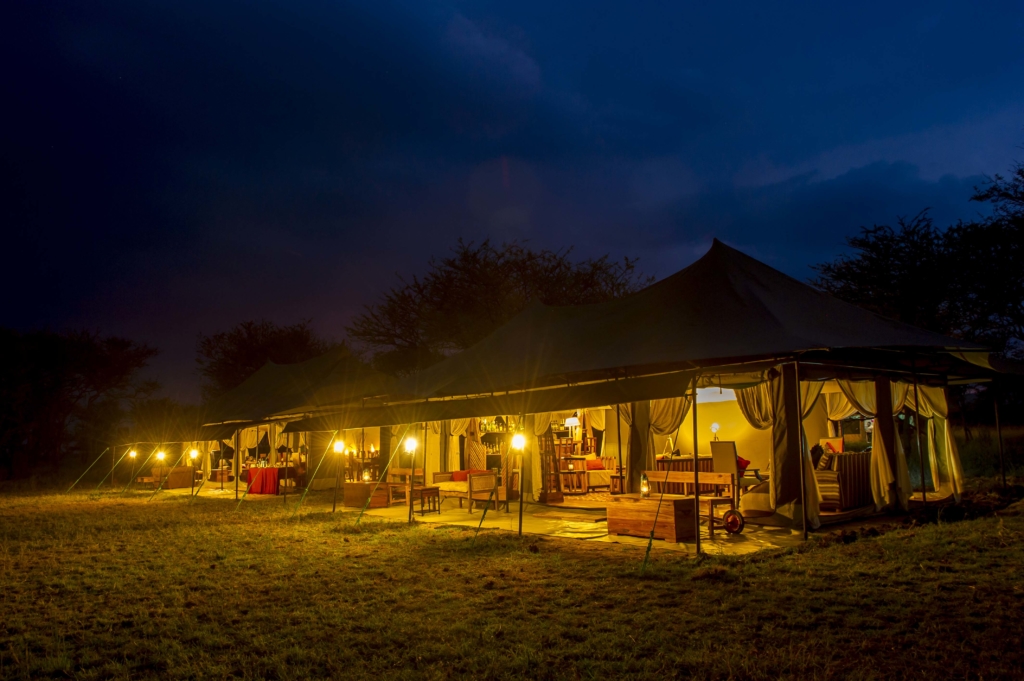 The origins of Nasikia Camps go back almost 15 years, to when an enterprising young hawker living in Arusha met a Brisbane nurse doing volunteer work in Tanzania and they fell in love. Nas Mfinanga had developed his passion for the wild wandering the plains of the Serengeti as a child with his grandfather. Donna Duggan had backpacked in Tanzania before returning with a nursing degree, for which she had paid by baking cakes in her mother’s kitchen. Tourists would ask Nas to recommend safari operators and the couple decided to run safaris themselves. Donna sold her car back in Brisbane and they bought a battered Land Rover and started off by taking Donna’s Aussie mates on safari. The next step was to open their own game lodges. Mornings at Kaskaz Mara Camp start early with coffee and a bite before the first game drive of the day. With so much prey around, the Serengeti is also renowned for its big cats, and we soon spot a cheetah surveying the possibilities as would a suburban madam eyeing the aisles at Thrupps. The grass looks as if it is freshly mown, a perfect race-track for the world’s fastest mammal. Time to get nervous if you are potential prey, but cheetah can only sustain their lightning-bolt sprint for a short time, so the antelope make sure to maintain a suitable distance . Even their most fervent advocates will concede that wildebeest don’t exude oodles of charisma. Nobody is going to invite a wildebeest home to meet mama and papa but, in their thousands, they are magnificent. After the two nights at Kaskaz Mara Camp, I calculate that I have seen more than 100,000 of them.

It ’s time to leave the northern Serengeti. My next destination is Ehlane Plains, a camp situated in the Soit le Motonyi region in the east of the reserve. I fly to Seronera, the Serengeti ’s main airstrip, and then it’s a 90-minute drive. At this point, the story of Nas and Donna takes a tragic turn. On November 15 last year, Nas was on a flight to the site where Ehlane was to be built when the plane in which he was travelling crashed into the top of the Ngorongoro Crater, killing 10 passengers, including his brother Shatri and himself. Donna was left completely devastated and with two young children to raise on her own. But she says she never considered abandoning their dream. Fondly known as “Mama ” and fluent in Swahili, she also didn’t want to endanger the livelihood of their 200 employees and the couple ’s numerous humanitarian causes. The Nasikia team held together, and Ehlane Plains was built in four weeks, opening earlier this year. The Ehlane Plains camp leaves a light footprint on the earth, and the surroundings radiate a deep sense of stillness and peace. For two decades this remote area of the Serengeti was set aside for cheetah research, out of bounds for tourists. The eight luxury tents are spread far apart, each under its own acacia tree. My own is fit for an Arabian princess as well as her handmaidens. Next to it is a deck with a four-poster bed, covered with a mosquito net that creates a natural planetarium at night. 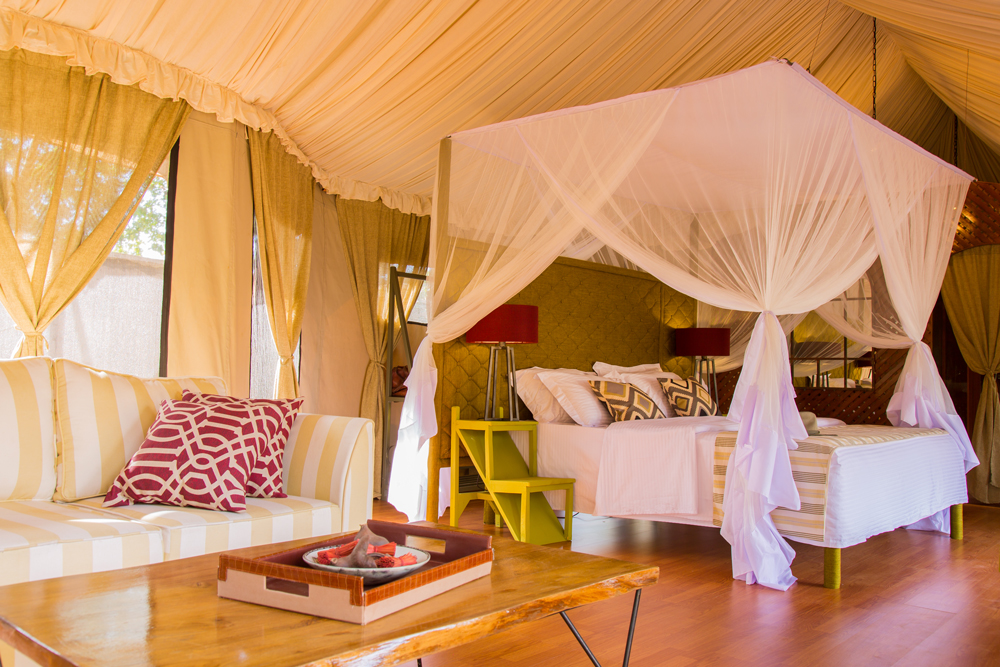 SPACE AND SKY AND STILLNESS

There are 3,000 lions in the Serengeti and this area has an especially high concentration of lion and cheetah. Six male lions swagger down a road with a koppie of giant granite rocks as the backdrop. They’re followed by the alpha, a magnificent specimen with a black mane. Just outside camp, a cheetah kills a newborn Thompson’s gazelle for her two cubs. The cubs are learning predator chutzpah and chase off a jackal, who ventures near as darkness falls. There is space and sky and a great stillness from my deck at dawn. I feel as if I am the only person on the planet. This aura motivated Nas to choose this location for Ehlane Plains. Travellers have long written about the effect the Serengeti has had on them. Legendary biologist George Schaller observed that “tawny lions will forever prowl our memory and great herds throng our imagination”. Nobody leaves here untouched.

About the Author: admin