Early detection for the gold standard for cardiology

Heart disease is one of the biggest killers in the Western world. Renowned cardiologist Dr David Lipkin says to avoid contributing to that statistic, early diagnosis is vital.

Athird of patients with heart disease, also known as coronary artery disease, may present for the first time with a heart attack, a third will present to the coroner and a third with chest pain – a clear sign that there is an issue. While it is essential to treat the problem when you find it, even more important is early diagnosis, says Dr David Lipkin. ‘This has revolutionised cardiology.’

What many people don’t know is whether or not they are susceptible to heart failure. They could have no symptoms at all or experience something less obvious than pain in the chest, a rapid heart rate or shortness of breath such as

inexplicable indigestion or nausea, light-headedness or sweating. ‘If you have pain that makes you feel ill, pain that wakes you in the middle of the night that you’ve never had before, or pain that affects you when you go for a walk after eating, you probably have angina,’ says Lipkin.

These are the kinds of things that many might wish to explain away, being unable to afford a doctor’s visit, being fearful of the outcome or simply not wanting to be seen as a hypochondriac. Lipkin says, ‘Change your approach. The consequences are too dangerous and early diagnosis will allow medical practitioners to be more aggressive in their method of preventing the occurrence of an acute heart attack out of the blue.’

According to the British Heart Foundation, someone suffers a heart attack every three minutes. In around 30 percent of those cases, the result is fatal. The good news is that that number is improving. The reason? In the UK and Europe, people are more educated about heart disease and many are stopping smoking.

There are various ways to screen people who have a heart disorder apart from the simple non-invasive stress tests. General screens by your local GP may flag issues such as cholesterol, excess weight, poor diet or a predisposition to high blood pressure, but it’s not just a matter of treating symptoms Lipkin explains. ‘We can do a coronary calcification scan on a cardiac CT scanner, which is cheaper than a battery of non-invasive tests. We know that when calcium is attracted to the heart arteries, they narrow – and they’re only 2,5mm to 3mm in diameter to begin with.’

The scan is an easy 15-minute outpatient test, for which most centres have the equipment, and will show how significant the blockages are. ‘A normal chest x-ray won’t reveal this. The arteries are too tiny and the heart is moving. It’s a bit like needing to photograph a racing car with a superfast shutter speed.’

When somebody does have a heart attack, however, what is often neglected is a look at their first-degree relatives. Coronary artery disease is a familial disease, which is passed on through generations. There is a tendency for women to be neglected, because their risk of heart failure only increases after menopause.

Among people younger than 40, the most common cause of heart failure is cocaine abuse. ‘I had a patient last week, aged 41, who ostensibly blacked out at a party. It transpired that he’d taken cocaine,’ says Lipkin. The act of snorting cocaine narrows the blood vessels, causing spasm in the arteries. If blood flow is blocked off for a few seconds, the user might be ok, he explains, but if the arteries hold the spasm, the result is a heart attack.

There has been a lot of debate about whether stress really causes heart disease. Research has linked heart attacks to volcanic eruptions and earthquakes, but these incidences were rare. It often boils down to personality type. ‘Most people can’t change the habits of a lifetime. If working is stressful, can you afford to stop? Working hard may be less stressful than not working hard,’ says Lipkin.

If a change in diet is recommended this is relatively easy to deal with by switching to a more Mediterranean style (fish, vegetables, olive oil) to reduce cholesterol levels and carbohydrate intake. This, combined with exercise, also reduces the risk of developing diabetes.

‘It’s common sense to advise people to make more time to sleep, to rest, to go for a walk,’ says Lipkin. ‘Cardiologists enjoy doing the unblocking, but most of our work should come before that. When I was younger I used to look at why we get breathless. But that’s not as new as the inroads we’ve made into early detection of coronary artery disease.’ 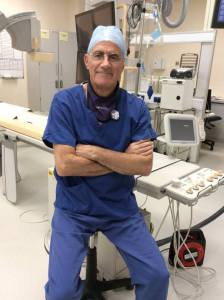