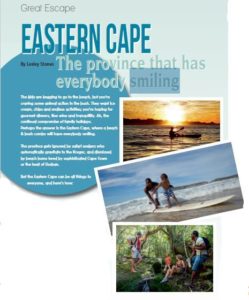 Plettenberg Bay
Plett has long been seen as a rich whites
only destination, but Plett Tourism
(www.plett-tourism.co.za) is keen to shed
that image. For a start, if you visit out of season your wallet won’t take such a pounding.
The beach is the hub of activity, with surfing at Lookout Point and whale watching cruises departing from Central Beach. Kayaking is a lively way to tackle the waves, and Dolphin Adventures has single and double kayaks for hire. On a blustery morning my trip was postponed for two
hours until the wind calmed down, when I waded into a double kayak with a guide for extra stability. It’s huge fun, paddling along in the swell, admiring the coastline and hoping a dolphin will come cavorting by.
Plett is now on the wine-making map, with 14 estates developing in the past 17 years. Ten are open to the public, and specialise in sparkling wines because the coastal climate is better suited to white grapes.
Another year-round attraction is Tenikwa Wildlife Awareness Centre, (www.tenikwa.com) which rescues and rehabilitates injured animals. You can join a cheetah walk or a tour to see cheetahs, lions, servals and caracals that can’t be released into the wild again.

CemAir (www.cemair.co.za) makes getting to Plett from Joburg or Cape Town a pleasure. You pick up your luggage directly from the plane when you land, so you don’t need to wait at the carousel or protect it with cable ties either! 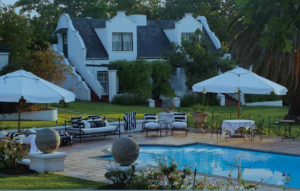 A magnificent manor
The glorious Kurland Hotel is 20km out of Plett, close enough to the attractions, but away from
the crowds and with rambling grounds to romp around. It’s a polo estate so you can watch a
match or even have polo lessons, pop your kids on a Shetland Pony, or go horse riding. There’s a
pool and tennis court, and free mountain bikes, quad bikes and beach equipment to borrow.
Leave your kids in the supervised playroom, jungle gym and kiddies pool while you enjoy a
treatment at the spa. The bedrooms in this luxurious manor have decadently large bathrooms, a lounge area and private courtyards, and many have loft bedrooms attached for the kids. The food is superb too, and room rates plummet in low season.

Flying High
Pilot Tertius Myburgh is an enthusiastic ambassador for Plett, and moved his family there from Joburg for a change of lifestyle. Now he’s promoting its charms to attract more tourists, convinced there’s so much to do that there’s no need to bother with any other beach destination.
Myburgh launched Plett Air Safaris (www.plettairsafaris.co.za) in 2017, with three Cessnas flying to Graaff-Reinet and to Samara, Kwandwe and Shamwari Private Game Reserves. For the next leg of my Eastern Cape epic I flew with him to Graaff-Reinet, a lovely town with historic buildings to explore and
homely coffee shops to unwind in. It has a whopping 220 heritage sites, more than any other town in South Africa, including Reinet House, the Old Residency Museum, Urquhart House and the Military
Museum dating from the 1800s. Or go back to prehistoric times by viewing fossils in the Old Library
Museum. 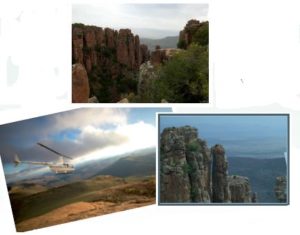 Walking Wikipedia
Tour guide David McNaughton is a walking
Wikipedia, a non-stop source of fascinating
information from Karoo Connections
(www.karooconnections.co.za). He’ll show you around Graaff-Reinet and Camdeboo National Park, which has the town surrounded. A winding road leads up to panoramic viewpoints over the
stunning Valley of Desolation, with 120m tall columns of dolorite sprouting from the plains of the Great Karoo way below. It began raining as we arrived at the top, then the sun broke through and the landscape sparked around us.

If money is no object, it’s fabulous to arrive at your next destination by helicopter. Fly Karoo
(www.flykaroo.co.za) offers scenic flights and transfers, and can fly at low altitudes for brilliant
views of Camdeboo because a percentage of the fee is donated to the park. The Valley of
Desolation’s weird rock formations are even more spectacular from the air.

My heli flip took me 53km over the mountains to a plateau in Samara Private Game Reserve, where a picnic lunch was waiting. 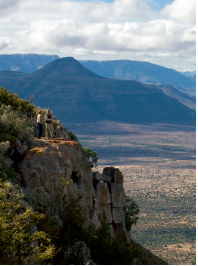 Bringing back the Big Five

Samara (www.samara.co.za) is a heartwarming conservation story, with the owners Sarah and Mark Thompkins piecing together 11 cattle farms 20 years ago to restore the
degraded land and reintroduce species that once roamed freely.

Plants started to regrow after two years and eland, hartebeest, kudu, springbok, cheetah and black rhino were gradually reintroduced. Leopards, vultures and aardvark returned without human intervention as the reserve recovered. Last year, a family of six elephants was releasedinto Samara, and once they’re settled down amature male will join the clan. 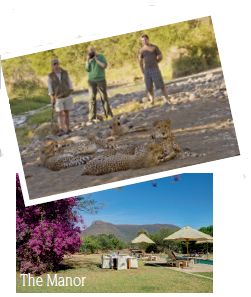 Then lions will be introduced to shake things up again.
One morning we clamber up a steep slope and look down into a gorge to see Chilli the cheetah, laying panting while her four cubs feasted on a breakfast kudu she’d just caught them.

Stay in the Karoo Lodge, an old farmhouse
with comfortably rustic cottages, or rent The Manor with four luxurious suites.

Magical memories
For a grand finale to an Eastern Cape
adventure, try Kwandwe Private Game Reserve
(www.kwandwe.com). This is Big Five territory
and the game drives are unmissable. We
watched six lions laze on the side of the road as
a lioness walked towards us, growling loudly
and menacingly. Magical memories.

Kwandwe’s Fish River Lodge is gorgeous, with a plunge pool on your private deck and views over
the river. You can also have spa treatments in your luxurious room. The meals are another high point, with dishes like perfectly cooked quail, Norwegian salmon, and chocolate mousse. Another option, Ecca Lodge, is ideal for families, with organised activities including cooking sessions and learning about
conservation. 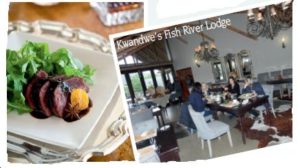