Skip to content
Previous Next
Losinji: Croatia’s overlooked jewel in the crown – The Independent UK 24 May 2016

Once favoured by royalty, this island’s appeal has been overtaken by those further South – but with fewer crowds it’s all more enchanting

Each of the 1,000 or so island that make up the Croatian archipelago comes with its own distinguishing micro-identity. In the Southern (Dalmatian) region, Brac is known for its stone; Hvar is famous for its beauty and its long days of sunshine; Korcula is celebrating as Marco Polo’s birthplace-turned-windsurfer’s paradise. In the North (Kvaerner region), a simpler way of life is revealed: Cres is known for its olive oil and lamb; Pag, for its cheese, sea salt and ancient city; Susak, for sandy beaches.

Then there is Losinji, a large (by Croatian standards) and beautiful island, 20 miles by two, located I the central Northern Adriatic at the mouth of the gulf of Kvaerner. Losinji enjoys not one but three reputations. In the 19th century, the five-mile natural harbour that island encompasses became the shipping hub of the Adriatic. The island was also the preferred holiday resort of the Austro-Hungarian emperor. Franz-Josef. Today, Losinji is known as the “island of wellness and vitality”. Yet Losinji has declined from its Belle Epoque pomp. Curiously, it gets overlooked in today’s Gadarene rush towards Dubrovnik and Split.

There is no runway; just a tiny airstrip. The simplest landfall is by flying to Zagreb and approaching by road and ferry via Krk. If you’re extravagant, you could charter the island’s light aeroplane and fly from Venice directly to Losinji, or take the seaplane from Slpit.

Seaplanes in Croatia are an old newly reborn. The Cosulich family, which co-founded Alitalia, originated from Losinji, and funded a Northern Adriatic seaplane service which flew from 1921 until Italy’s capitulation in 1943. Now, European Coastal Airlines, the creation of a consortium of German pilots, has returned seaplanes to Croatia. The view of the Kornati labyrinth from 10,000 feet are worth the air fare alone

Arriving in Losinji, just as the sun dips behind a glass of chilled Istrian white, you’ll find the travails of the journey melt away.

A characteristic feature of Losinji is its abundance of herbs; some 1,200 therapeutic and aromatic varieties thrive on the island. Such open-air aromatherapy promotes health but is anathema to mosquitoes. The island furthermore solves two common Croatia problems: it has ample modern accommodation, but no crowds. And there are no venomous snakes. Which makes Losinji perfect for outdoors family holidays. There are 250 Kilometres of walking trials and cycling paths. The notched and indented wild coastline contains surprises galore, and that’s before you stumble on the naturists’ colony (on which the tourist literature is strangely silent).

I can recommend cycling or walking up the hill that forms the mass of the Southern part of the island. If you pause to absorb the panorama and then continue South along the spine of the island, the road begins to plunge downwards. Here you can take in a magnificent seascape of the neighbouring island of Ilovik and the Northern trip of the Kornati labyrinth. If you’re feeling hungry, look out for signs to Balvanida restaurant, a heavenly spot sequestered in a forest on the Western side of the island.

Losinji reputation as the island of vitality rests on the painstaking research of Ambroz Haracic, a 19th-century botanist. By some calculus of sunshine, Humidity, temperature and latitude, Haracic revealed the healthiest climate in the Austro-Hungarian Empire. Assoon as word reached emperor Franz Josef, His Serene Highness was packing his bucket, spade and mistress. Several weeks later, the Emperor returned to Vienna detoxed and fit.

I suspect that Losinji’s real appeal was Cikat Bay, the island’s most beautiful natural feature. A starfish-shaped bay 500 metres across, Cikat debouches westwards into the Adriatic. In antiquity, the romans hid their fleet here. In the 19th century, the schlag of Austrian society made this Riviera. From Cikat’s afforested shoreline, villas peep out from behind pine trees, among them the pink-washed Villa Carolina that Franz Josef erected for his mistress. 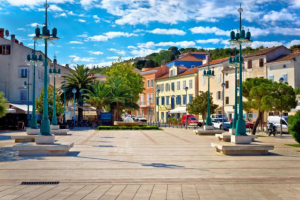 Cikat translates as “wait”, appellation that derives from the vigils of mariners’ wives. Near the votive chapel at the entrance to the bay is one of the most romantic spots on the island, Lanterna restaurant. The views, the warm breeze, the sound of waves and the grilled sea bass make this an enchanting place.

By whatever contrivance epithets like “island of vitality” have been pinned on, they seem to have stuck. Losinji’s hotels help you chase the rejuvenation rainbow, or simply neutralise the effects of the food, wines, grappa, coffee and cigarettes so beloved by the locals. You can lose yourself in aromatherapy, body scrubs, exfoliation clinics, Croatian Kinesiology, thalassotherapy, Pilates and yoga. The majority of the hotels are pitched at the middle market, with a couple – the Alhambra hotels are the Hortensia – aimed higher. May choice is the Bellevue, a modern, white building located on Cikat Bay. Its vast spa offers treatments for every condition, real or imaginary, although I found a spell on a sun-lounger on the lido interspersed with dips into Cikat Bay worked just as well.

Losinji wraps both a journey and a destination: it is a place to patch up the temple, undo it again at your choosing, and discover Austro-Hungarian Emperor within, while basking in the Mediterranean idyll.

European Coastal Airlines (ec-air.eu/en) operates services to Mali Losinji from Split and Zadar, both of which are collected by scheduled airlines from the UK including EasyJet, Ryanair, Croatia Airlines, Norwegian, British Airways and Jet2. Seaplane tickets from around £80 one way.

Alternatively, Losinji can be reached by ferry from Zadar, Cres and Krk (jadrolinija.hr).