A recent article in the Daily Mail described Lošinj, an island off the coast of Croatia, as a hidden gem for top-tier vacations…but we were curious about what kind of luxury hotels the country as a whole had to offer. We reached out to Andrew Shapland, self-described “Roving Ambassador,” to get the insights on Croatia’s luxury tourism scene, which he said is “growing by the day.”

While acknowledging that Croatia’s top-tier hotels are still an “emerging market,” Shapland cited a few worthwhile properties. The Esplanade in Zagreb, for example, was once the hotel where passengers on the historic Orient Express would spend two nights on their trip to Istanbul. “Wherever you go in the building, there are these beautiful old photographs of interesting characters and celebrities that used to pass through and stay there. So you’ve got a very pleasant hotel with plenty of history and culture…I always stay there.” 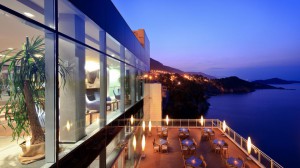 In Dubrovnik, Shapland likes the Hotel Bellevue, a smaller property that is part of the Adriatic Luxury Hotels portfolio. The hotel is set on a cliff and offers some top views. “It’s a very pleasant property,” he said. Another Dubrovnik hotel, the Pucic Palace, needs some “upgrading” before he would stay there again. “It’s a little tired,” he acknowledged.

In Split, the Hotel Vestibul Palace, a member of Small Luxury Hotels, is “lovely and really unique,” Shapland said. “It’s in the part of Split where the dome gives superb acoustics, where the Dalmatian singers sing every morning, and you get the echo of [their music], all in the old city of Split.” The hotel is right in the middle of the old city, and has “lovely” rooms and “great” standards for luxury, he added.

Looking ahead, Shapland said that there is “huge investment” for hotel development, especially in Lošinj. “There are millions and millions of euros being invested,” he said.

The island, which had traditionally been uninhabited, has only recently seen any development. It will soon get its own Bellevue Hotel, slated to open in July. But Shapland has high praise for the existing Alhambra Hotel on the island, which has just seen an investment of more than 30 million euros for renovation. “It’s the remnant of what was a stunning old villa,” Shapland said, “so there’s lots of history there, and pedigree.” The hotel sits right on a bay overlooking the Adriatic sea, he added. “And it’s right on the shores of the bay, so it’s a very special setting as well.” Two new villas will be added soon for a more exclusive experience.

“If you look at Croatia as a destination, it’s probably one of the last unexplored, uncommercialized secrets in Europe,” Shapland said. “You have a coastline–I think it’s about 900 kilometers–so if I think of the Amalfi Coastline in Italy 50 years ago, when it was the home to the likes of Sophia Loren–that’s what Croatia is like now. It hasn’t been overdeveloped. It’s got all of these beautiful old villas. They have really good wines and exceptionally good food–which is primarily organic, I would imagine, from the flavors. So it’s an undiscovered destination. Where can we go in the world now where we really find unique, undiscovered places that offer beauty, that offer stunning surroundings, that offer clear waters–and don’t have thousands of people.” The appeal for hotel development makes sense, he continued. “Invest in an unexplored destination and maintain it as a luxury property. The investment is a good one whether you decide to sell or keep.”