There are thousands of reasons why people fall in love with Mozambique – including endless deserted beaches, pristine reefs, sparkling turquoise seas, and the friendly, welcoming people. Christopher and Stella Bettany, owners of Azura Benguerra, fell hook line and sinker for Mozambique the moment they first touched the sand, and this year, their beloved Azura celebrates 10 glorious years of excellence.

21°51’12.83”S | 35°26’ 18.79”E – these are the GPS co-ordinates of Azura Benguerra in Mozambique. It is in close proximity to absolutely nothing but the warm, tranquil waters of the Indian Ocean. As our helicopter left the continent behind in a lazy haze of African heat to later touch down on the abundant green of Benguerra, this peaceful isolation made itself known. Approaching by air gave us an exciting overview of the oasis in which we would find ourselves for the next few days, and we hit the ground

keen to explore the island. After checking in and meeting our host and Azura Benguerra GM, Peter Siebert, we were introduced to our base for the next few days.

Peeking out at azure waters through an assembly of tropical foliage are 20 hand-built villas, one of which we were to call home. They’re constructed using an indigenous aesthetic, with low-hanging wisps of thatch camouflaging the contemporary, open-plan and spacious interior. Each boasts its own infinity pool, with ours appearing to stretch out longingly towards the ocean. 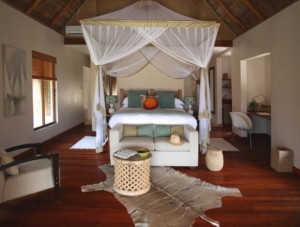 Wanting to see more but not quite ready to abandon the splendour of my immediate surrounds, I decided to follow the pool’s suggestion and stroll out onto the beach. Taking in the calm blue waters lined by an infinity curve of palms, I couldn’t help but feel strangely disconnected from reality, yet strongly rooted to Mother Nature.

Benguerra offers a variety of ways for guests to interact with their new-found environment. As it is part of a national park, it’s replete with wildlife. We experienced a taste of this on our first outing – a snorkelling expedition at Two-Mile Reef. The reef offers some of the best marine-life sightings off the east coast of Africa, and it wasn’t too long before we came across a turtle, followed shortly thereafter by a magnificent stingray, gently drifting along in the soft current.

Other friends of the island include hundreds of species of tropical fish, dolphin, and the endangered and peculiar dugong. At certain times of the year, the humpback whale alsomakes its pilgrimage past the island.

After enjoying the visual feast of this underwater world, we were treated to a similarly impressive culinary spread prepared for us on the beach. Locally sourced delicacies including freshly caught fish made us feel as if we were truly living from the land, as nature intended.

What naturally followed was something of a sunny sabbatical – hours of relaxation spent between the beach and the hotel’s bar, library, lounge, spa, wine cellar and restaurant, Jellyfish. Particularly good for freshly sunned skin is the spa’s Tribal Traditions massage, which sees you covered head to toe in olive and shea butter, and then massaged using African drum rhythms.

If your travel companion prefers to move to the beat of his or her own drum while you get buttered up, an outing to The Red Dune and Crocodile Lakes Drive is a great way to explore the island. The drive winds its way through the diverse tropical landscape populated by a medley of reptiles, birds and insects – some of which are endemic to the island. Small local villages punctuate the route, so stop and meet the locals, taste the indigenous wild fruit, and even join an informal game of football while you’re at it. The islanders have an enthusiastic football culture, complete with an island league and weekend matches.

For the even more active, adventures in the area are plentiful. Mount a horse and take a trot along the coast, jump on a boat and go deep-sea fishing for dorado or barracuda, or take a hike (in the nicest way possible) up Bazaruto Dune to savour the 360° panoramic views of the archipelago before exploring the old Portuguese ruins of yesteryear. 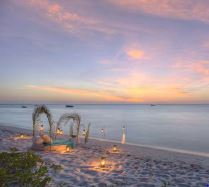 On returning from my own adventures for the day, I stepped onto the deck to find that a candlelit beach dinner had been laid out for us. Our seafood was expertly barbequed while we gazed at the countless stars above. There was something truly unique about this combination of the natural, raw environment and personal interaction with our host. Despite the luxury of it all, it didn’t feel as if we were assigned a concierge or butler. Rather, we had found a guide and friend – somebody to deepen and personalise our integration into this wonderfully uncharted territory.

By the end of the evening I was able to slip – completely satisfied – into a deep rest, duly enchanted and looking forward to another day in paradise found.
For more info, visit www.azura-retreats.com.