Mr Simon Moyes is one of London’s leading Orthopaedic surgeons specialising in arthroscopic / key-hole surgery for the knee, shoulder, foot and ankle. Yet amidst his hectic work schedule, Moyes has undertaken a charity bike ride across Romania, participated in a leading European yoga retreat and dived into the Mauritius ocean – just a few of the active holidays the surgeon has visited over the past 6 months. It is no surprise that achieving maximum health and fitness goals are also part of Moyes’ prescription for patients which have included international sports personalities, models, royalty and city based bankers. The Simon Moyes clinic has built up a remarkable reputation, with over 15 years working in full time private practice. His clinics are based at, Platinum Medical Centre (The Wellington Hospital) and at 31 Old Broad Street in the City, are busy all year round whilst Moyes also helps to develop new techniques and innovation in the arthroscopy and stem cells.

Once a protégé of Sir Rodney Sweetnam, an outstanding pioneer in Orthopaedics for his generation and also for a period, an Orthopaedic surgeon to the queen, Moyes has made his international presence known, amongst an affluent community in the Middle East, the sub-continent of Africa and the increasingly affluent Chinese.

According to the United Nations World Tourism Organization, for the latter half of last year, the UK saw a substantial surge in Chinese tourists heading towards the capital post-Brexit and more so in the luxury market. With the plummet of the pound and more simpler, hastier application processes for visas, Chinese tourists have been predicted to spend £1billion in the UK by the end of 2017. This boom in Chinese tourists is also making an impact on private healthcare in the UK which is ranked top out of 11 of the world’s wealthiest countries in a study by the US Commonwealth Foundation. The UK healthcare system is a huge draw for Chinese medical tourists. It’s the quality of care, efficiency and low cost at the point of service which are contributing factors – now even more so with the pound’s depreciation post-Brexit. 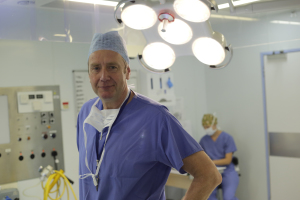 Moyes says, “London tends to be one of the locations where medicine and technology innovations are used first and naturally specialists capitalise on such cutting edge techniques. The practice has always attracted those that prefer to use the expertise and the facilities of a London private hospital therefore I can understand why such services are appealing to Chinese tourists”.

According to the Chinese media, it is also common for Chinese tourists to travel to countries such as USA, New Zealand and the UK, where medical healthcare is regarded as more advanced than it is in their homeland. Mr Simon Moyes says that he, too, receives a growing number of Chinese patients at his clinic, and they are referred to him following consultations that predominantly are shoulder problems.

Over 80% of his patients are treated non-operatively, although even if they require an arthroscopy due to technical developments in this area, the surgery is normally quick, easy and performed as a day case.

“I can understand why international travellers will use London as a one stop shop, for business, shopping and healthcare. Arthroscopy is a minimally invasive and highly effective technique that requires very little down time. Perfect for those who prefer a quick solution in a luxury setting,” says Mr Moyes.

Within the wider healthcare industry, the latest medical devices and technology are offering real benefits to patients, for example arthroscopic technology is permanently evolving and making the surgeons life easier. Mr Moyes works closely with a couple of companies that have developed excellent tools for making it easier for surgeons to carry out cartilage repair surgery. There is also a new device a form of radio frequency probe which enables certain types of arthroscopic surgery to be carried out faster and more effectively. Mr Moyes says, “It is these type of innovations that are valuable to the knee, shoulder and arthroscopic hip surgery and no doubt international patients are one of the most highly informed and are keen to be treated with the latest techniques”.

Developments are also happening in the area of reconstructive surgery and that we are now allowed to use bone marrow derived aspirate concentration to augment cartilage and ligament repairs. This aspirate is rich in stem cells and whilst still experimental is believed to enhance cartilage, ligament and tendon repair and can also be used to treat arthritis.

However, it is not just all technology and medicine that is part of Mr Moyes’ reputation. His overall mission is to ensure the patient is happy and informed at all times – he believes this is all part of an efficient recovery plan that his whole team are known to deliver. As such, in order to ensure the continued success of his practice, Simon will continue to maintain his current high service, integrate the latest developments and innovations into his work to ensure he is always offering the very highest standard of service to his patients, wherever in the world they might come from.