A taste of good life is on the chef’s menu 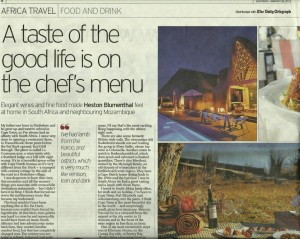 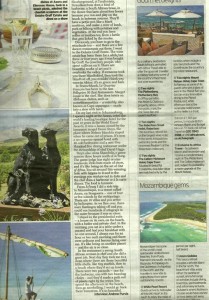 My father was born in Zimbabwe and he grew up and went to school in Cape Town, so i’ve always had an affinity with South Africa. I came very close to opening a restaurant there, in Franschhoek, three years before the Fat Duck opened, but it fell through. The place is called La Couronne now, a wine estate with a thatched lodge on a hill with eight rooms. It’s in a beautiful green valley with Cape Dutch houses, so it’s very different from the Duck – a cramped 16th-century cottage by the side of the road in Berkshire village.

I was desperate to have that river, that mountain and all the sensory things you associate with memorable destination restaurants – but I didnt have it in Bray. I think that forced me down the multi-sensory route that became my trademark.

The food wouldn’t have been anything like Fat Duck, because you couldn’t have found the ingredients. At that time, even gelatin was hard to come by ans seasonality would have been an issue. South Africans had less adventurous tastes back then, they wanted familiar comfort food, but that has completely changed now. The cuisine you see today is refined, balanced and quite modern in terms of  it’s lightness but showcasing South African produce.

They have beautiful fish and seafood down there, from hake and yellow-tail to west coast mussels and oysters from Knysna, between Port Elizabeth and Cape Town. What South Africans call crayfish are more like small lobsters, so you get wonderful crayfish tails. The meat is also exceptional. I’ve had lamb from the Karoo, an inland region where the sheep graze on wild grasses and herbs, and beautiful ostrich, which is very like venison – so a lean, darker meat, not too gamey. The beef is as good as you’ll get anywhere in the world.

On the wine side, there used to be the big cooperatives such as KWV producing huge quantities but now there are lots of small independent winemakers. The only thing I’m not keen on are the South African Sauvignon blancs, when they get that grassy, cat’s pee, elderflower note to them. There are some great chardonnays coming out there but, for me, the white grape of the moment is chenin blanc. The new boutique wineries, not least the winemakers Ken Forrester, are doing super-concerntrated chenin blancs that lasts for years. I’d say that’s the most exciting thing happening with the whites right now.

There are also some fantastic Rhone-style reds, The winemakers Ali Badenhorst stands out and leading the group is Eben Sadie, whose top wine is Columella. Another estate to watch is Bockenhoutskloof, which does syrah and cabernet in limited quantities. There’s always Meerlust, owned by the Myburgh family, an old dynasty of winemakers in the Stellenbosch wine region. They have a Cape Dutch home dating back to the 1700’s and the last time i was in South Africa we had a great tasting and a lunch with them there.

I travel to South Africa fairly often for work or on holiday. I’ve been to Cape Town, Port Elizabeth and Johannesburg over the years. I think Cape Town is the most beautiful city in the world – and surprisingly small, given how immense Africa is. You can be in a vineyard from the airport to the city centre in 15 minutes and in the heart of the wine region in less than an hour. One of my most memorable stays was at Ellerman House, on the Camps Bay side, at Bantry Bay. There’s been a booming trend in guesthouses, smart B&B’s that are more like boutique hotels with four, six or ten rooms. This place takes that concept to a new level. It overlooks the sea, there’s a 24-hour gym and butler service. In the garden they have modern art and, in the main house, a collection of South African old masters. The food is delicate, modern and perfectly pitched for people staying there. It’ refined but very satisfying. Harald Bresselschmidt is another chef with a refined cooking style and I’d like to recommend his Cape Town restaurant, Aubergine. Also a friend of mine, Luke Dale-Roberts, has a place in Woodstock called The Test Kitchen. It has to be the best restaurant in South Africa in terms of modern, cutting edge cooking showcasing regional ingredients: things like pan-fried springbok with butter-roasted carrot. fole gras, black pudding and Jerusalem artichoke. He’s just opened a simper brasserie-style place next door. The Pot Luck Club, which does tapas-style food with an Asian flavour. Sometimes, though, it’s traditional things that i crave. North of Bloubergstrand, at Yzerfontein, Strandkombuis does a kind of barbecue, a South African braai, in the dunes that lasts about four hours because you run and play on the beach in between courses. They’ll have a potjie pot, like a black cauldron, and make a stew of lamb, pork or biltong with potatoes and vegetables. At the end you have coffee or rooibos tea, from a kettle that gets licked by the smoke.

Obviously, you have to go to the winelands too – and there are a few decent restaurants out there. I went to Delaire Graff Estate. The wine estate has been there for a while but three or four years ago it was bought by Graff, the jewellery people, who spent millions on it. There are beautiful works of art and it overlooks the valley. If someone took you there blindfolded, then took the blindfold off, you wouldn’t think you were in Africa: it’s so green and lush.

In Franschhoek, Le Quatier Francais has been in the San Pellegrino 50 Best Restaurants. Margot Janse is the chef. She does twists on Afrikaans dishes, such as waterblommetjies – a waterlily, also known as Cape asparagus – made into a stew with lamb.

On my last visit to Johannesburg, I spent the night at the Saxon, voted the world’s leading boutique hotel for the past 10 years in the World Travel Awards. It was a house owned by the insurance mogul Douw Steyn, the place where Nelson Mandela stayed when he came out of prison. It’s now a no-expense-spared hotel with 40-odd bedrooms and a new Fove Hindred fine dining restaurant under the stewardship of chef David Higgs. Steyn also owns Shambala, a game reserve three hours north of Jo’burg. The game lodge has eight or nine rondavels, Zulu huts made of straw, and it’s like bring on a set of Out of Africa. You sit around this watering hole with hippos in it and in the evenings you venture out in 4X4’s and chef does a barbecue or a a la carte dinner. The food is fantastic.

From Jo’burg I did a side trip to Mozambique, to a resort called Azura, on Benguerra – one or four or five islands in the archipelago. There are 16 villas and you arrive by helicopter. As we flew over, there were flamingos taking off and you could see hundreds of stingrays in the water because it was so clear. i stayed in the presidential suite – a house on it’s own, on the beach, with a butler and private chef. In the morning, you sat at a table under a parasol and had your breakfast with no one around. I always run for an hour or two each morning and there were pelicans and herons flying over me. It’s like being on another planet – and the air is so clear.

In the restaurant a young South African woman is chef and she did a great job. Next day they took me to a dune where there are those beautiful little shells, like tiny starfish, then to a beach where they’d set up lunch. There were two parasols – one for barbecue, one with two beanbag chairs – and they’d made a path out of plants tight by the water. You spend the afternoon on the beach, then go snorkelling. I would go back there tomorrow. It’s so beautiful.

Mozambique has some of the world’s most spectacular undeveloped beaches, from Ponte Mamoli in the south, via the Bazaruto Archipelago to Quirimbas Archipelago in the north, and the traveller is now able to enjoy these from some outstanding resorts:

Guests arrive by helicopter at this chic resort in the south to enjoy the miles of silky white sand it has all itself above on offer is per person per night, half board.

This luxury retreat occupies a private island in the far north. The beachfront villas enjoy either the sunrise or sunset, and a full range of activities include diving. boat trips, spa treatments and astronomy lectures. Quilalea is where Robinson Crusoe would have wished to have been cast away. Cost: from GBP390 per person per night full board.