Skip to content
Previous Next
Camp Kuzuma is where luxury and wilderness meet – African Independent, 17 June 2016

Camp Kuzuma is where luxury and wilderness meet

I hadn’t realised elephants were so seasonal. If you picture an animal migration, you probably think of millions of wildebeest crossing the Serengeti. But elephants also follow the food, game ranger Gary Perryman explained when I asked why a world-famous elephant corridor” seemed a little short on actual elephants.

I was visiting Camp Kuzuma in Botswana’s Chobe region in a season of aquatic abundance. Water lay shimmering across the endless plains and pans, allowing the animals to merrily scatter far and wide.

In the parched months from July to November, they cluster around the waterholes that provide their only place to drink, and you can sit on Camp Kuzuma’s wooden deck and watch the wildlife parade in front of you – elephants in magnificent herds, zebra and giraffe, a dozen different antelope and an exciting array of predatory lions and elusive leopards sneaking up behind.

Dry season is when a film crew from Disney’s wildlife department and a German documentary crew return each year to create nature programmes that enchant the world. A video camera at the waterhole has captured up to 140 elephants at a time and is ranked in the global top 25 by EarthCam. In other words, Chobe boats the biggest herds of elephants on the planet.

I scoured the landscape again and frowned. Not a single pachyderm in sight. Perhaps they were hiding behind the thousands of butterflies that cascaded up in glorious curtains of colour as we drove through puddles of water.

Perryman had a plan up his khaki sleeve, of course, and the next day we set off to cruise along the mighty Chobe River. The Chobe is teeming with wildlife and viewing it from a small boat on an enormous river gives you a new perspective. 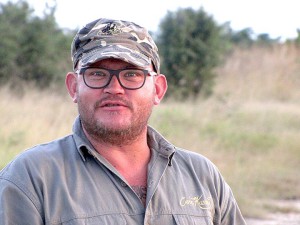 It was magnificent. We spotted large crocs basking with malicious intent. A noisy squabble of pied kingfishers played around nest dug into the muddy banks. A cormorant dried its wings in the sun and two hippos raised their snouts from the depths to take a look at us.

Then the elephant circus came to town, with a mother and baby clowning around in front, a young male testing his virility in the background and 20 or 30 others splashing around. Now we were so close that when one rate teenager comically charged at a flapping bird I was suddenly aware of just how near we were.

Perryman didn’t mention being charged by elephants but he did tell great stories about being charged by lions a few times – 90 percent of the time a lion will strop just in front of you, he promises, and so far his luck has held. 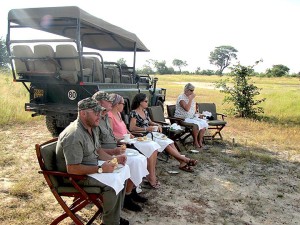 Amazing wildlife is one of the reasons why Botswana was chosen as the Lonely Planet’s top country to visit in 2016. Other reasons to love the place are its friendly people, stable democracy, spectacular scenery and fabulous game lodges.

Camp Kuzuma is about an Hour’s drive from the delightfully small Kasane airport and close to the point where four countries meet – Botswana, Namibia, Zambia and Zimbabwe. The animals are unperturbed by our man –made borders and roam wherever the whim or the water takes them.

The camp is so luxurious you almost don’t want to get up and go bouncing around in the bush anyway. Its five suites are each created from canvas on a wooden platform but I’m hesitating to use the word ”tent” because this bears no relation to camping. Each has a king-size bed; a bath; his and hers sinks and shower; an outdoor shower; a coffee station and a decanter of part conveniently placed near the viewing deck. 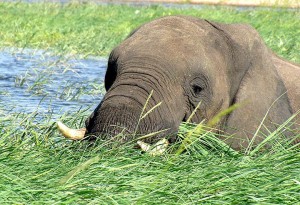 The Canvas walls are unzipped by day to give magnificent views of the bush and zipped up again at night to deter any predators. Like squirrels, who camp manager Jaco Kok blamed for the mysterious disappearance of a toothbrush from one of the suites. We reckoned he’d nicked it himself and invented the squirrel story just to enhance the bush mythology.

The squirrel apparently used to steal the little bars of soap too, so now your soap comes in a liquid dispenser too heavy for a squirrel to haul into the trees.

If I was a squirrel, I’d rather hang around the kitchen, where Kok and Chef Dandi Sekwababa rustle up some delicious creations. 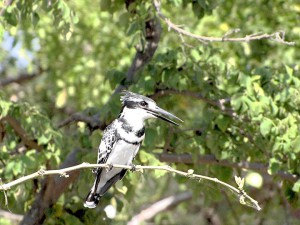 Kok is a flamboyant character, as much of an attraction as the roving elephants and thieving squirrels. He was once a contender for MasterChef and has cooked with Madonna’s favourite Chef, Giorgio Locatelli. It feels rather strange to sit in the bush doing a taste test of his chutneys or debating how to brown the perfect crème brûlée.

The open-plan main lodge has elegant chandeliers hanging from high thatched roof, a dining area, a long wooden bar and a lounge with a bookshelf and clusters of armchairs. The wooden deck facing the waterhole has loungers and a small swimming pool perfect for a plunge in the midday sun.

Another treat is the spa tent, where Precious Sithwala gives massages, facials and hand and foot treatments, while you watch the bush. I kept looking out for elephants but they must have been still rollicking by the river. 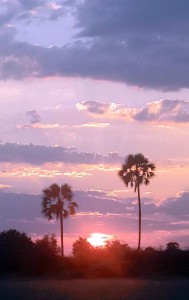