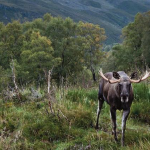 The 90-minute drive from Inverness to 23,000 acre Alladale ends in half-hour run along a narrow road that peters out to a gravel truck. This middle-of-nowhere estate is very definitely somewhere, however, and not just because of its recently refurbished Victorian main lodge. There are glorious views of majestic Glen Alladale from two newer, smaller lodges, Eagel’s Crag and Ghillie’s Rest, which are superb retreats with rich, antler-and-tweed interiors by former Mulberry director Jill Evans (and underfloor heating powered by Alladale’s own hydroelectric turbin).

In the visitors’ book guests write excitedly about stalking their first deer, an activity Alladale provides along with fishing, pony riding and mountain-biking. But since the MFI heir Paul Lister took over 10 years ago, Alladale has also become a brave experiment in ‘rewilding’ turning back the clock to a time before the trees were cut down and the land was overgrazed by deer. It includes replanting Scots pine and other indigenous trees (800,000 so far), restoring peatlands, halving deer numbers, and hosting wildlife programmes with Oxford’s WildCRU unit. A contentious reintroduction of wolves is still part of the plan, but the reserve would need more land and it would have to be fenced.

There’s always something going on. I embark on a four-wheel-drive safari with one of the estate’s rather brilliant rangers, John Calder, who takes me to see Alladale’s five Highland

ponies, quietly grazing alongside Highland cattle in Glen Mor, and introduces me to Cas, a three-week-old calf born to a pair of European elk brought in from Sweden. According to Alladale’s general manager, Hugh Fullerton-Smith, she was the first elk to be born north of Great Glen in 1,100 years, and she has since been joined by a sibling. The reserve has also introduced a bison-breeding programme with a bull from Denmark and four cows from the Netherland, plus two breeding pairs of Scottish wildcats. Totally inspirational.