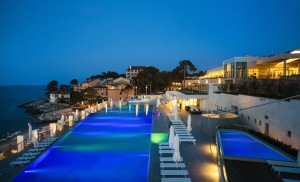 In 1996, a Belgian tourist was scuba diving about 140 feet below the surface of the crystal clear Adriatic Sea near the Croatian island of Losinj, when he happened across something spectacular. Wedged between two rocks and covered in colorful sponges was a life-size statue made of bronze. Three years later, when archaeologists raised the statue, it was revealed to be a Classical Greek Apoxyomenos, an athlete—most likely an Olympic wrestler—removing oil and sand from his nude body with a small metal scraper called a strigil.

Though heavily incrusted and saturated with salts, the statue was complete, the best of its kind. After seven years of restoration, the beautiful young athlete was once again on his feet, first in Zagreb, and then in Paris, in front of the Louvre. Now he is being brought to his own museum on Losinj to symbolize the rebirth of an island that became famous in 1892 as a natural health resort: the “Island of Vitality.”

Unlike other health resorts in Eastern Europe that are known for healing mineral waters, Losinj became famous for its sunshine, moderate climate, and clean salt air that supposedly cured the Archduke Frances Ferdinand of tuberculosis. But the island’s healing reputation goes deeper. From its mineral-rich soil grow 1,200 native herbs, 200 of which are medicinal. The local herbs benefit from the soil, but so do the sheep that graze on the herbs, which gives the meat a distinctive and delicious flavor that is said to be especially healthy. The area is also famous for seafood, olive oil, wines, and the nearby salt beds that have been in production since the Romans. Public walking trails ring much of the island, so the basic healing prescription has been to walk the trails, breathe the air, and stop every so often to eat at an open-air seafood restaurant, take a swim, or get a massage at one of several shoreline hotel spas.

The exercise rooms are real training facilities staffed by people who know how to teach. There’s also plenty of space for yoga, Pilates, and fun-looking aerial exercises I had never seen before. The spa is cheerful and spacious, and the practitioners we experienced were superb.

Losinj lost its international reputation during the Communist years and the Civil War, but it is coming back. Last fall, my wife and I were invited to visit for the opening of the Hotel Bellevue, the island’s first five-star resort, which grandly symbolizes what that part of the island will likely become: a luxury playground for the yachting set. But a few miles away, near the ancient port town of Mali Losinj, we visited another large new hotel that is less opulent but personally much more interesting: a “wellness” hotel called Vitality Hotel Punta, built in the classically healthy spirit of the Apoxyomenos.

The guest rooms of the Hotel Punta are simple, bright, and comfortable and many have spectacular views. The dining area is large, communal and festive—featuring a wide array of food in the various buffets that are coded so that one can easily choose to be vegan, macrobiotic, paleo, gluten-free, low-carb or carbo-loading. There’s a sports dietician on staff to help negotiate the choices. The outdoor, saltwater pool is Olympic length to accommodate people who take swimming seriously, and the indoor pool is almost as long. The exercise rooms are real training facilities staffed by people who know how to teach. There’s also plenty of space for yoga, Pilates, and fun-looking aerial exercises I had never seen before. The spa is cheerful and spacious, and the practitioners we experienced were superb.

The hotel is directly on the coastal path and only a 15-minute stroll to the restaurants and shops in the tiny historic port. Perhaps most remarkable, a single room with breakfast and dinner is less than $100 per night. This is a place to restore your vitality and write that book at the same time.