There are so many urban legends about hippos and why they spend daylight hours submerged in rives. Their looks appear totally out of proportion: large bodies, small ears, beady eyes and nostril perched high on their heads. Nature is the uber designer and hippo is perfectly put together for its amphibious lifestyle. As one of the world’s most dangerous animals, due to their unpredictability, I find them intriguing. I learnt a great deal about these large, surprisingly fast-moving beasts on a recent trip to the Selous Game Reserve in Tanzania, home to over 40 000 hippos at last count five years ago.

Spanning 44 oookm², Selous is the largest game reserve in Africa. To put it into perspective, it is larger than Switzerland. Declared a world heritage site by Unesco, the Selous has a widely changing landscape to accommodate the large species of animals that roam freely. Sightings include the Big Five and Little Five (elephant shrew, buffalo weaver, leopard tortoise, antlion, rhino beetle).

Azura Selous, a luxurious tented retreat situated on the Great Ruaha River, is one of the few camps within the game reserve and is built to blend with the unspoilt environment. Each of the 12 beautifully appointed vials offers incredible views of hippos wallowing.

Big bulls or babies float semi-submerged throughout the day, masquerading so convincingly as boulders that you have to look twice. Emerging after dark to feed, they lumber up to 5km in search of their favourite herbivore meal, while flinging dung to mark their territory. Although their closest relative is the whale, they can’t swim but rather run, quickly, under water, holding their breath for up to five minutes. Their “yawning” is not a sign of boredom or fatigue but their preening and showing off their large, razor-sharp, weaponry.

Guests at Azura Selous often encounter hippos on the paths or grazing alongside the villas, which is why between sunset and sunrise you are escorted by a private soldier, an Askari. Armed only with a traditional spear, he is fearless and gently encourages the hippos to move along.

Activities include game drives, walking and boating safaris, fishing encounters, star gazing and spa treatments. Getting up close and personal with hippos on a sunset cruise is a little daunting but the expert guides have your safety as priority.

Vitus Satala was our dedicated tracker and the man behind the wheel of our 4×4 as we traversed the rugged terrain, his eagle eyes spotting the camouflaged animals, followed by fascinating facts and tales of each one. His knowledge of the area and the fauna and flora was staggering, a walking, talking, wildlife “google”. He asked if there were any specific animals we’d like to see and tracked each while showcasing others we hadn’t considered.

We were shown how to identify different spoor, whether it was fresh and the direction the animals was heading. We learnt how to gauge the size of an elephant by measuring its foot (multiply by 7.5).

We encountered giraffes with their long eyelashes and equally long tongues to make eating leaves around the thorns possible. We met Balotelli, a dominant male lion in one of the prides, so named thanks to his Mohawk mane, which mimics the hairstyle of the Italian footballer. We spotted prehistoric-looking hornbills and white-headed vultures who, contrary to popular belief, don’t always wait around for scraps but are capable of killing their own prey.

We tracked and monitored a pack of 21 wild dogs, 11 of which were pups, as they moved from one den to the other for safety. The adults hunting, killing and returning with fresh food to feed the youngsters through a rather macabre regurgitation process. A protective elephant mock charged us while a herd of buffalo grunted and rustled nearby. The cry of a fish eagle pierced the bushveld silence as we sat watching various buck slowly eating their meal while keeping a watchful eye on the hyenas and lions close by.

The changing topography of the area shows how nature’s ecosystem is a masterful interactive design. Every creature is sustained by another. Sustaining the natural order is an important objective at Azura Selous.

At the camp, private splash pools, outdoor showers, extra king-sized beds, air conditioning, ceiling fans, mosquito nets and his/hers basins are standard. Beautifully prepared gourmet meals are served either at the lodge, in the bush, along the river or beside the pool. Unobtrusive hosts cater to your every want. And after the “bush massage” (what the staff call driving and bouncing along the donga-pitted dirt roads), it’s time for a gentler back massage outdoors on the private villa patio.

One of the most memorable experiences is the “MasterChef” three-course meal, served in the heart of the bush. Flickering lanterns, a fire and the stars are the only light as you dine around a beautifully set table. 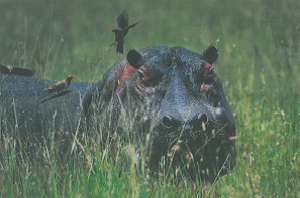 On the final evening, sipping a sundowner on the patio, I looked across the river, watching the wide-mouthed hippos showing off and honking, I couldn’t help but smile as the Chomp advert sprung to mind – that cute little hippo trying to open his mouth wide enough to enjoy the treat, I yawned widely in unison.