When the stars of the show delay their entrance in Chobe, there are plenty of ways to fill your time

The dry little pellet skimmed over a clump of grass and landed in the sand, only a metre from where I was standing. Drat. I thought my spitting was much better than that.

I gargled with some Chardonnay and tried again. Phhooff. This time the dry pip of rhebok pooh flew much further.

Yes, I’d finally succumbed to the legendary game where safari guests see who can spit animal dung the furthest. There’s even a name for it in Afrikaans, bok-drol spoeg, which makes your mouth helpfully moist just trying to pronounce it.

Strangely, and thankfully, the pooh doesn’t actually taste of anything – as long as you don’t chew.

We’d resorted to silly games after failing to spot a single elephant swinging through the world’s busiest ‘elephant corridor’ linking the famous Chobe in northeast Botswana and Hwange National Park in Zimbabwe.

When the plains are dry, the watering hole at the luxurious Camp Kuzuma lodge attracts up to 140 elephants at a time, and its video camera is ranked in the world’s top 25 by EarthCam for its elephant and predator activities.

But now water was shimmering throughout the grasslands, leaving the animals spread far and wide.

One morning head ranger Gary Perryman leads me on a bush walk, and hundreds of bright yellow and green butterflies flutter up in unison as we pass. Perryman tells fabulous stories about the time he was charged by a black rhino, and the several times he’s faced down charging lions. He points out a trail of Matabele ants searching for a termite mound to raid and plunder. Then he tells me how to fix a missing button using an ant’s head. You hold the large ant up to your shirt, and once it bites the material you snap off its body, leaving its head in place as a button. I look at him askance, but he swears this bewildering tale of bush life is true.

Camp Kuzuma is a five-star lodge with only five suites, a swimming pool and a bush spa. Each morning the sun had me up by 6am, shining through the long meshed panels of my tented suite. Technically it’s a tent, but equipped with a sundeck, a massive bed, safari-style decor, a bath, his-‘n-hers showers and a deliciously naughty outdoor shower too. 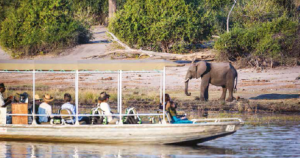 The flaps are zipped back every morning for a brilliant view, leaving nothing between you and the animals. One squirrel may now be the baffled owner of a toothbrush, since one went missing from another tent and camp manager Jaco Kok reckons squirrels are the prime suspects.

The camp is eco-friendly, generating electricity from solar panels, drawing water from a borehole and pumping used water through a processing plant and into the waterhole. Elevated wooden walkways connect the main lodge to the suites and a guide with a torch escorts you home at night, in case a leopard is skulking on the boardwalks.

Another takes exception to a cheeky wading bird and repeatedly tries to charge it, flapping and trumpeting furiously. A herd of buffalo wanders down, and the elephants give them space.

It’s magical, watching the action from our watery vantage point, and as our little boat nudges even closer I wonder if the testosterone-fuelled youngsters will take exception to our intrusion too. But they tramp off into the bush and seconds later they’re invisible. I suspect they were silently watching me spitting all along.

A manager worth meeting

Botswana has rounded up its rhino into highly protected game reserves, so Camp Kuzuma isn’t in big five territory. But its flamboyant manager Jaco Kok is a sight worth seeing.

With a flair for words, an extraordinary supply of anecdotes and a passion for cooking, it’s odd that he spent years in the mining industry before discovering his talent for hospitality.

He was a contender for MasterChef South Africa but was dismissed because he didn’t have a ‘TV personality’. Are they kidding? He’d have stolen the show!

He’s cooked with Madonna’s favourite chef Giorgio Locatelli, admits an addiction to wine gums, and proudly presents dishes like pancakes filled with artichoke hearts in oriental sauce and liquorice-infused mascarpone, which wobbles like a boob implant.

One evening after the staff has sung for us around the fire, Kok lyrically tells us that his camp offers the spiritual five: the hypnotic lull of the fire, the tranquillity of water, aromas of the bush, the sound of silence and the rhythm of Africa. Worth considering …