TRUMPETING and flapping his ears, the young male elephant charged. The target of his

fury? Not our boat, metres away on the Chobe River in Botswana, but a bird. He was chasing a blacksmith lapwing (once upon a time a plover) and didn’t give up until it flew away. Elephants reign supreme in northern Botswana, where huge breeding herds roam freely along natural corridors which extend for thousands of kilometres into four nearby countries.

The Namibian, Zambian, Zimbabwean and Angolan borders are all within 200km of the town of Kasane in Botswana. When we left the town, we saw elephants strolling next to a queue of trucks waiting for the ferries. That is why, on a warm afternoon, elephant sightings in the Chobe National Park, by land or boat, are virtually guaranteed.

After watching the beast-vs-bird antics, we saw two young males crest the ridge. They headed for a copse of trees, where one mounted the other.

Moving out of the wings, a mother and baby elephant took centre stage. Spraying himself with water from his short trunk, the baby was like a toddler with finger paints trying to copy a Jackson Pollock — mud and water splattering everywhere. This baby was firmly under his mother’s trunk and, at one point, slid into a mudhole beneath her.

Meanwhile, dozens of elephants wandered down to the bank along with buffalo. Three adult elephants waded out to swim, flopping onto their sides and vanishing from view. Elephants were everywhere. In the deeper water, we saw a half-submerged male feeding, with greenery hanging off his tusks. That night, back at Kuzuma Camp, a large bull loomed out of the gloom at the waterhole like a phantom. He was joined by another bull.

The waterhole in front of the camp in the Kuzuma Forest Reserve is a popular drinking hole in the dry season from about June to October. There is an EarthCam trained on this site  which, in December, was chosen out of thousands of entries as one of the top 25 in the world for the quality and uniqueness of its content. (You can see the live footage at earthcam.com/world/botswana/chobe.) 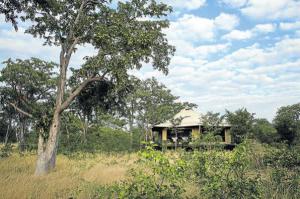 Disneynature visits the camp every year to film breeding elephants; and Kuzuma partners with the wildlife organisation Elephants Without Borders. Yet elephants are not the sole attraction here.

On a dawn game drive, we saw a huge male leopard hurtling through the grass with its white-tipped tail whipping like a flag above it. Bat-eared foxes, jackals, a lone

hyena, a journey of giraffe and buck such as kudu also made appearances. The game ranger, Gary Perryman, has spotted rarer creatures there such as pangolin and honey badger.

The 11 800ha forest reserve has about 16 lions in its pride, although sightings, as with most animals in the wet and shoulder seasons, are infrequent at the camp’s waterhole until the swamps and puddles dry up. More than 800mm of rain fell during the last wet season from November to March.

Birds and butterflies abound in all seasons, however, and 196 species of birds have been identified at Kuzuma.

On our way into the forest, vivid clouds of pansy, blue-spotted yellow and African ragtale butterflies rose up around us and we saw birds of all sizes, including secretary birds, chats, martial eagles and snake eagles. Under the stars, we listened to the distinctive calls of pearl-spotted and African scops owls.

The reserve has no rhino since all their kind in Botswana are protected in two sanctuaries, where they are more closely guarded than the president, according to manager Jaco Kok.

Kok, who has cooked with chefs Ainsley Harriot and Giorgio Locatelli, and who once made it to the top 100 in the Master chef cooking show in South Africa, has a lust for life that is most obvious in the menu.

Our flamboyant host did his best not only to stir up gourmet dishes but also to find adventure, for example, searching for a snake we could handle (no luck, though). He has removed a 2.5m snouted cobra from camp and has — out in the bush — twice been spat in the eyes by Mozambican spitting cobras. Both times he was wearing glasses.

In a remarkable snake tale, the 76-year-old Tannie who bakes for Kuzuma once got bitten by a black mamba, was flown to Joburg for anti-venom, and a month later was back in camp, baking koeksisters.

he oddest thing we did for kicks was hold a kudu-dung spitting competition (yes we were sober and yes, it’s a thing. Apparently the world record is 15.56m). The pellets taste of nothing more than grass but cherry-pit spitting is more fun.

Kok and writer Lesley Stones spat their bokdrolle far further than I could too.

When photographer Marianne Schwankhart’s toothbrush vanished from her luxury tent — which she had asked to be unzipped and open to the bush, despite bugs and leopards — we suspected Kok was the prankster. Marianne loved Kuzuma and had only two complaints: “We had such good food that our jeans no longer fit. And a squirrel stole my toothbrush.”

In other words, an idyllic bush camp.

WHAT IT HAS: Camp Kuzuma has five luxury, open-plan tented suites and is a five-star ecolodge (off the grid, all water is recycled). The canvas-and-stone suites open up fully to the bush, giving them a spacious and sunlit charm. Each one has a stoep, an extra-length kingsized bed with a mosquito net, overhead fan and armchairs. The bathrooms include inside and outside showers and a Victorian bath. Wooden walkways lead to the private suites under mopane trees. The bar, lounge, living and dining area are open-plan, under a high thatched roof. They overlook a plunge pool on a wooden deck and a floodlit waterhole on the pan. The Kuzuma Forest Reserve is in a busy elephant corridor between the Chobe and Hwange national parks. In the dry season, big cats also frequent the waterhole.

THE FOOD: We ate like kings, thanks to chef Dandy Sekwababa and manager Jaco Kok. The homemade rusks at daybreak, continental breakfasts with muffins in the bush and cooked breakfasts at the camp, high teas, and extravagant dinners (including a braai in the sunken boma) catered to every taste. Our favourites were the desserts, which included a liquorice panna cotta with black pepper (sounds weird but it was great) and an Amarula crème brûlée.

RATES: SADC residents pay $410 (about R5 800) per person per night all-inclusive, except for Cuban cigars and luxury whiskies. Kuzuma also has special offers: pay for two/stay three nights and pay for three/stay four nights, including a cruise on the Chobe River.

GETTING THERE: Airlink (flyairlink.com) offers direct flights between Johannesburg and Kasane, Botswana, for about R6 000 return. Return flights operate daily and take around two hours. From Kasane Samauel Tshekonyane runs a professional transfer service (lea.co.bw/bigsam-hubber) to Kuzuma, which takes roughly an hour — unless elephants block the road. By road, Kasane is about 1 190km from Johannesburg.