Skip to content
Previous Next
Pass this way to the top, Sunday Times 17 January 2016

Pass this way to the top

In the middle of summer, the Lesotho mountains offer a cool respite with spectacular views, writes Claire Keeton

TO escape the heatwave, take to the hills. Even in summer it snows at the top of Sani Pass, the steep dirt road that snakes up from KwaZulu-Natal into the mountains of Lesotho. The first snowfall last year was recorded on January 8 at Sani Mountain Lodge. The coldest day ever recorded was -21 degrees Celsius on June 8 2012. This is a remote destination. On Sani top, 2 874m above sea level, bearded vultures fly along the cliffs below your feet and you stand above the swirling clouds, looking down into the valley of Khomozana near Underberg. Thabana Ntlenyana at 3 482m — the highest point in Africa south of Kilimanjaro — is a day’s walk from the lodge. Sani Mountain Lodge is the only establishment right on the edge of the Drakensberg-Maloti escarpment.

It’s a comfortable base for Alpine adventures, and hikers, bikers, 4×4 drivers, horsemen and skiers are often packed into “the highest pub in Africa”, which has 120 reds on its wine list and an astonishing view. The barman, with his head in the clouds, is a preacher in his free time. His predecessor left to be a pastor. Most people walking the slopes are shepherds — some as young as 10 — clothed in Basotho blankets and gumboots, with their sheep and goats. 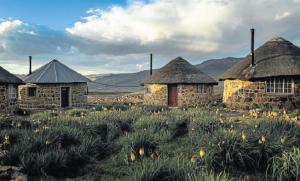 Getting to a faraway place takes longer than expected, and darkness fell as we wound our way up the 25km pass to the lodge. The pass officially starts near Sani Pass Hotel and rises about 1 900m through sharp switchbacks with a gradient of up to 1:25, making it one of the steepest passes on the sub-continent. The South African border post is near the lower end and by the time we reached the Lesotho border post at the top, it was so cold that the officials ushered us inside while they stamped our passports. The lodge is a stone’s throw from there so we were soon in our rondavels, each of which is heated by an anthracite fire. The pub that night was thrumming with off-road bikers on their way to the Roof of Africa bike rally through Lesotho, rated one of the toughest off-road events in the world.

On the second night it was packed with Italian bikers on an off-road tour through southern Africa. Lodge owner Khapametsi Maleke and her daughter Tebs joined us for a buffet dinner along with the manager and a ranger. In the morning Khapametsi took us along a road newly tarred by Chinese contractors — controversy rages about paving Sani Pass —from the border post to the village of Mokhotlong. Our first stop was the River Craft Shop, where Basotho dolls with blankets and woven baskets were spread out on the mud floor. Further north at Number 10 Riverside, a backpackers, we came across travellers resting under fruit trees near a river. They had been hiking overnight to Thabana Ntlenyana and Hodgon’s Peaks. Our next stop was a large barn full of sheep shearers working flat out. They each shear an average of 60 sheep a day for R2 per pelt in the summer. Ntja Polelo, wearing a woollen hat with a pom-pom, grabbed a sheep under its chin and showed off his skills.

Sheep shearers from Lesotho and South Africa have won the “Blades” (hand-shearing) category of the Golden Shears World Shearing and Woolhandling Championships for more than 10 years, even beating New Zealanders. From sheep we moved on to horses, another common sight in the highlands. From the lodge we rode out on two mares with guide Konopo Ramohlai. Soon after passing a bearded vulture hide, our horses stopped to nurse their foals. We dismounted on the uphills, so it took a while to reach the viewpoint known as the Saddle, a dip between two cliffs on the edge of the escarpment, where a feast of cheese and wine had been set out by the lodge. Of all sundowner spots in the world, this is one of the best I have seen. After a peaceful night we picked up the pace, starting early on our hike to Thabana Ntlenyana. The high altitude and low oxygen make this a demanding 25km hike, but the trail itself is gentle, rising slowly through wetlands towards rockier ground. The trail is not marked so adventure guide Leaba Mobote showed us the way. We walked without stopping and around midday reached the summit, a pile of rocky boulders about the size of a soccer field. The looming clouds motivated us to get moving and in the final hour we walked through stinging, freezing rain while thunder and lightning raged around us. The electrical storm was frightening, and we were aware that strikes have killed more members of the Mountain Club of SA than any other natural danger. Basotho shepherds often face this hazard as they and their dogs walk in the high country. The hike took us almost seven hours, which Leaba said was the fastest he had done it. It usually takes a full day.

Of all sundowner spots in the world, this is one of the best I have seen

Back at the lodge, the entrepreneurial Khapametsi has dreams of promoting eco-tourism. However, her first task after buying the lodge in 2012 was to put her own house in order. Solar panels were being installed on the roof on the day we left and the lodge is more modern and cosy than in the past.

“The cold is an attraction but also a challenge,” she says. “It is in the middle of nowhere, which means

everything is imported. But I like the quiet, being away from the noise of the city. Every day at sunrise I hike along the edge of the mountains.” She looks out over the view. “This is a retreat destination where you can recharge, find yourself and touch base with nature.” And cool off too. 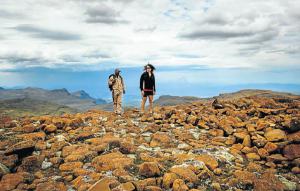 WHAT IT HAS: Sani Mountain Lodge has 10 rondavels with en-suite bathrooms, two family rondavels that sleep four and two that sleep six. All rondavels have fireplaces. There is also a conference centre with panoramic views. Within walking distance of the lodge is a backpackers with two dorms (one with four beds, the other with six beds) and one room for three, with campsites alongside it. The open-plan kitchen and living room next to the hostel is a great communal space.

THE FOOD: Organic, local lamb and trout are highlights on the menu. Farmstyle food is served and the buffet includes salads and home-made desserts. The breakfast is a feast with muffins and crumpets, good cooked fare and fresh and dried fruit, yoghurt and nuts.

GETTING THERE: It’s 560km by road from Joburg and from Durban it’s 215km to Himeville, at the bottom of the pass. South African border police may prevent drivers going up if they think their cars won’t make it. 4x4s are recommended. The lodge offers transfers for guests. Airlink flies to Pietermaritzburg, and from there it is 180km to Himeville. Return fares are about R3 500. Don’t forget your passport.

■ The Sani Stagger Endurance Race goes straight up the pass on the last weekend of November. Runners can do a half-marathon or 42km. For details visit www.sanistagger.com.

■ The Sani2c three-stage mountain bike race is 265km, starting at the bottom of Sani Pass. May 12-14. For information go to www.sani.co.za.