Stones was a guest of Azura

per person per night for South

Africans, including all meals and

most drinks. A helicopter transfer

from Pemba can be booked for an 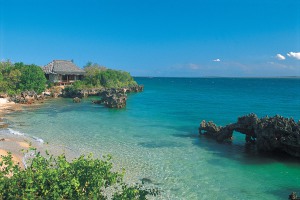 Your surprise is ready for you now, my butler tells me with a bashful smile. I’ve been banished from my beach villa for the past hour while the staff at Quilalea Private Island prepare a treat for me. My mind is boggling – this island feels so James Bondish that I’m expecting Daniel Craig to parachute into my bedroom. My chaperone, Vita Sufu, trots up the path ahead of me carefully carrying a cocktail. He walks onto the balcony and proudly pulls aside a fluttering lace curtain that wasn’t there previously. I burst out laughing. Behind the curtain sits a cast iron oval bathtub, overflowing with thick bubbles spangled with gaudy pink hibiscus flowers. The sun is setting in equally vivid pinks in front of me as Sufu discreetly disappears, leaving the cocktail within languid reaching distance of my tub. So this, I think, is what ANC stalwart and mining magnate Tokyo Sexwale gets up to in his time off. Quilalea is a tiny island off Mozambique that Sexwale bought in 2008 for a reported US$70m. He kept the place to himself and a few friends or business contacts until 2011, when he appointed Azura Retreats to run it as an elite resort. 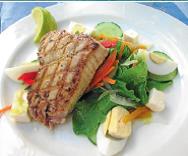 It sits in the Quirimbas Archipelago, a marine sanctuary of 32 picture postcard islands, some inhabited only by ancient baobabs, monitor lizards and monkeys. You can walk around it in an hour, following a baobab trail and scrambling over wavewashed rocks. The nine villas are spread so far apart that you’re rarely aware of your neighbours. Perfect if you want to keep your ANC guests away from any visiting DA or EFF supporters. That’s not as far-fetched as it sounds, because Quilalea is popular with South Africans thanks to heavily discounted packages to make our rand stretch further. It’s managed by South Africans Leon Joubert and Claudia Pellarini-Joubert, who are expert deep-sea divers and underwater photographers. They spent seven years running a diving resort in the Bahamas, and tell wonderful stories of filming for Hollywood and National Geographic. Skinny, blonde and beautiful, Claudia stunt doubled for the stars, filmed with Mia Maestro in Poseidon , taught actress Salma Hayek to dive and filmed Pierce Brosnan and Woody Harrelson. They’ve been at Quilalea since March, and have big plans to boost its allure for divers by offering underwater photography lessons. The Quirimbas have some astonishingly good reefs, with coral running right in front of Quilalea’s main beach. I spotted dozens of exuberantly coloured fish and a huge moray eel as I snorkelled in the tepid water.

Later as I’m lunching on the beach I watch a little boat put to shore and idly wonder if it’s pirates, come to kidnap rich tourists. Thankfully they’re only armed with  clipboards from the marine conservation board, to make sure nobody is chopping down trees or disturbing the turtles. That afternoon I meet watersports master Tristan Jenkins, who worked in office automation in Durban until he quit to play Robinson Crusoe. He’s whisking me to another island to kayak through mangrove swamps. That’s a high-tide activity, because if you time it wrong you’re left high and dry with your kayak parked on a mangrove root as the tide recedes. I wait impatiently for another couple, worried I’ll miss the trip because some Europeans think the tides work on African time. They arrive and apologise with an insouciant shrug, and soon we’re in the kayaks, paddling deeper into a silent forest. I remember reading a novel where children discovered a body trapped in mangrove roots, and I scour the tangled roots in curious trepidation. We don’t see much — certainly not a dead body — but the trip is enchanting as the trees close in and nature has us utterly surrounded. 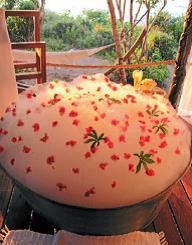 The villas of Azura Quilalea are gorgeous, each with a huge bed, a writing desk, a lounge area and lots of quirky touches, such as a safe made from an old wooden chest. A wooden deck overlooking the Indian Ocean spans various levels as it descends towards your private bit of beach. The main lodge has a bar and a sunken lounge, and a modest but deep swimming pool used for scuba diving training. Further along the beach are the dive centre and restaurant, though most meals are served on tables in the garden. The food is excellent, and the seared tuna quite exquisite. I ask if this no-expenses spared resort has lured a chef from a five-star hotel somewhere, but chef Julio Manuel is a local from the mainland. He’s so shy that he blushes behind his hand when I complement him, and bashfully inches backwards into the kitchen to escape the limelight. Since Quilalea is a tiny spit of an island with no runway, you arrive by boat or by helicopter from Mozambique’s Pemba airport. It’s fabulous to fly low over this string of islands and dazzling sandbanks in iridescent turquoise seas. It feels terribly jet-set, and makes you wish you were also a mining millionaire with a private island in the sun.