Skip to content
Previous Next
Rising from the ashes – Brainstorm, November 2015

Rising from the ashes

For a team-building exercise, the one endured by staff at the Tintswalo Atlantic Hotel was pretty extreme.

In March this year, 70 percent of the luxurious Hout Bay hotel was destroyed by fires that swept across the Cape peninsula. Initially, the beachfront hotel was spared as the inferno blazed through the trees above it.  Then, as the managers quelled minor fires the following morning, the flames whipped up and turned the hotel into an inferno.

Assistant manager Tanya Batista Hofer tells the story in chilling detail. She’s wearing a hard hat as she walks through a building site where the hotel once stood. Workmen are reconstructing rooms that were lost and the owners are carefully replicating its look and feel. 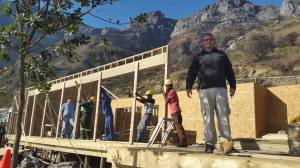 The team spirit and positivity that arose from the destruction has been incredible, she says. “The way everyone pulled together has been amazing. It’s been a great team-building exercise. You could say it’s been character building.”

The event itself was a nightmare for the hotel and 14 guests when fires started on the Muizenberg side, the other side of the mountain. When it crossed Ou Kappse Weg, the decision was taken to evacuate. Guests were woken and asked to pack and check out, and were taken to other hotels. The managers stayed to turn on sprinklers and soak everything before they finally retreated at 3am. Smoke from the wild fires was thick, and Batista Hofer drove up the narrow mountain road away from the hotel with her head out of the car window. “I had to squint to see through the smoke, and at the gate, our security guard’s skin was glowing orange with perspiration and the reflection of flames in the distance” she says. “But he was still standing there as proud as can be.” 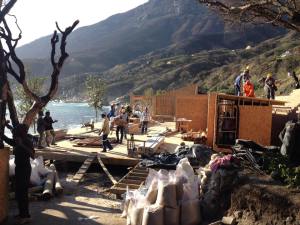 In the morning the managers expected to find everything burnt to the ground. It was like a black and white doomsday movie, she remembers. “The land was bare and black and smoking, but when we got to the bottom, the buildings were still standing. 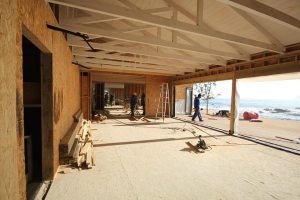 That same day, the owner called a staff meeting and committed to rebuilding as quickly as possible. “It was only hours later, and he said this is just building, the important part is our team and the energy we hold, and together we will rebuild it.” It was a memorable moment, when loss and hopelessness we replaced with by fresh enthusiasm and a fierce determination to rise aging.

None of the 35 employees were laid off and everyone tackled the clean-up. They cut away dead shrubs, replanted bushes on the mountain and cultivated a new nursery. With no formal work to do extra training and educational visits are being organised for them. They are volunteering in the community by helping the teachers at a school for needy children and taking the kids on outings. 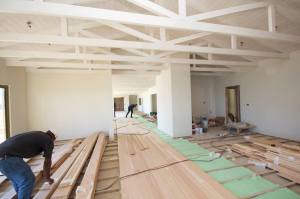 The hotel was only eight years old, so the original plans have been revived and the original builder came out of retirement to tackle the project. An unusual challenge is that all building materials and furniture must be negotiated down the one steep road that leads to the hotel. The general manager Melissa Du Rand says hundreds of beautiful items were all destroyed, like glass tables, Persian rugs, chandeliers, and a signed photo of Nelson Mandela. The worst feeling is of helplessness, that there was nothing you could do to stop the destruction.

“But the best moment was when the owner was here.” She says. “Everyone had a big cry, then all of a sudden it was a moment of, right what’s next, how are we recreating this? It was amazing.” The hotel was fully reopened at the end of November, in time for a wedding booked before the inferno. Nobody dared to tell the bride her wedding was off, Du Rand jokes, so they are working fast to meet the deadline.