Quilalea: Slip away to bliss

This strip of sand in the Indian Ocean is a perfect island retreat, writes Claire Keeton

UNDERWATER photographers Claudia Pellarini-Joubert and Leon Joubert have a unique

bond: they have both been bitten by sharks. Now living on the idyllic island of Quilalea off northern Mozambique, the couple have swopped filming sharks for managing Azura’s luxury retreat on this little outcrop at the southern tip of the Quirimbas Archipelago which begins just north of Pemba. north of Pemba. But they are still in their element on this uninhabited island with its coral reefs and sandy beaches. Snorkelling and scuba diving from the shore is a step away and this is the essence of Quilalea, effortless adventure and relaxation in tropical heat. A mangrove sanctuary accessible by sea kayak lies across a channel from the island, which falls within a protected marine reserve to the south of the archipelago. Turtles lay eggs on the island and from July to November, humpback whales come past the island. A desert island Quilalea is not. Baobabs and marula trees tower up from an inland forest where mangrove kingfishers sing all day and, in winter, Madagascan bee-eaters migrate there. 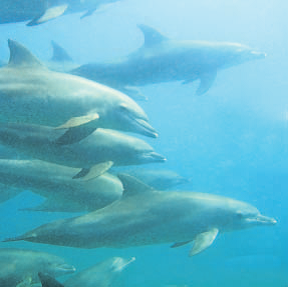 SCHOOL’S OUT: Dolphins frolic in the warm sea

Monitor lizards patrol the shadows and at night hermit crabs scuttle along the trails, quick to hide inside their shells. The shells on Quilalea are remarkable and often undamaged. White whelks, polished cowries, pansy shells and coral fragments are among the array that wash up with the tides, which differ by as much as 2m to 4m from high to low. Quilalea is a true island paradise, gorgeous and remote. Here we were free to do anything, or nothing, in our own time. One windy morning I kayaked around the island alone, catching waves on its wild side, far from anyone.

Another morning I went snorkelling off the beach in front of my villa, drifting above the corals among bright shoals of yellow and blue fish. Claudia and Leon believe in “island time” and go out of their way to fulfil their guests ’ wishes about what they want to do and when they want to do it. The husband and wife team have lived as nomads for more than a decade in the Bahamas and in Indonesia Papua. They have not owned a car or a cat in their 20 years together. As active is Tristan Jenkins, manager of the island’s marine adventure centre. He is 33 years old but retired some years ago from a lucrative job in Joburg to be an ocean guide instead. To reach the mangroves, we took a motorboat with him across strong tidal currents to Sencar Island, less than 2km away, which also falls within the marine away, which also falls within the marine reserve. We slid the kayaks off the deck and followed Tristan into a watery wonderland. It felt like a realm from Lord of the Rings, with branches tangling in green arches above the channels. We paddled through this nursery looking for reef fish and reef sharks, turtles and crabs, moving branches aside as the channels got narrower. They were green, not muddy like some mangrove swamps. As we rounded a bend, we saw a Goliath heron fly off its nest and we heard a fish eagle cry in the distance. After paddling a loop, we came out on the other side of the island and kayaked on the sea towards Quilalea as the sun set. Sundowners on Quilalea are a ritual as barman Aro Selemane, from the nearby barman Aro Selemane, from the nearby historic island of Ibo, shakes up the cocktail of the day. 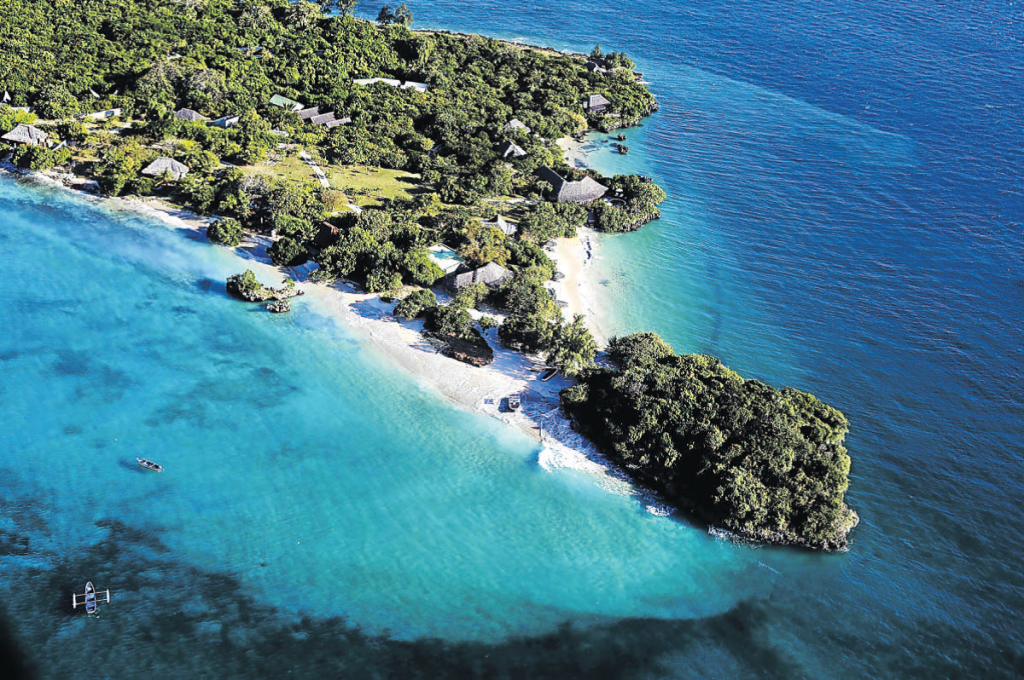 Nelson Muchang, our butler-host, was also attentive, arranging meals for us on the beach, the deck and in the baobab forest. Seafood including lobster, prawns, calamari, mangrove crab and linefish, freshly caught by Tristan and Mozambicans living on nearby islands, are the mainstay of the menu. This swathe of the Indian Ocean is famous for game fishing for GTs (giant trevally), yellowfin tuna and wahoo. Species such as GTs are caught and released. Tristan was disbelieving when he took us out one calm morning and, despite the lines twice going taut, we caught nothing. It was the first time this year he came back empty-handed after hours of trawling and us trying to cast poppers, a big floating bait. The best deep-sea-fishing spots, such as The Canyon, are — like the diving spots at The Canyon, are — like the diving spots at Ponta Flats and Ponta Wall — within half an hour’s boat ride from Quilalea. On this trip, Marianne did a resort diving course and dived for the first time on the House Reef, walking off the shore and floating down to 12 metres with Tristan, Leon and me. The water was about 25°C, its usual winter temperature — in summer is somewhat warmer. On our dive, we saw adult batfish, a whiptail stingray, pelagic fish, brindle bass and rainbow-coloured shoals of fish, although the pair of hawksbill turtles usually seen didn’t make an appearance. Th how it goes at Quilalea — its fans drift in and out with the tides and seasons, while we dream of going back one day. 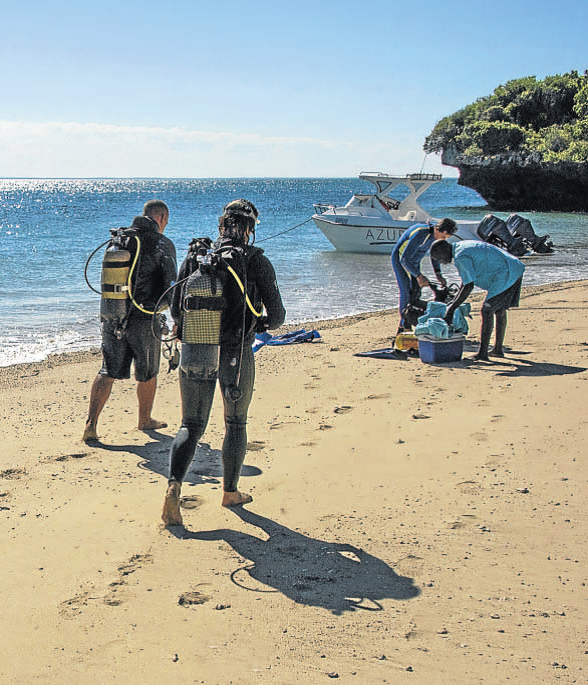 HAPPY TRAILS: The private Quilalea Island off the northern coast, left, and paddling in the mangroves 2km from the island, right. Below is a group preparing for a dive, with the writer in the foreground.

■ Keeton and Schwankhart were guests of Azura Quilalea and Airlink, which offers direct scheduled flights between Joburg and Pemba. See flyairlink.com . The trip was organised by The Roving Ambassador (therovingambassador.com), which partners with luxury hotels and game lodges. 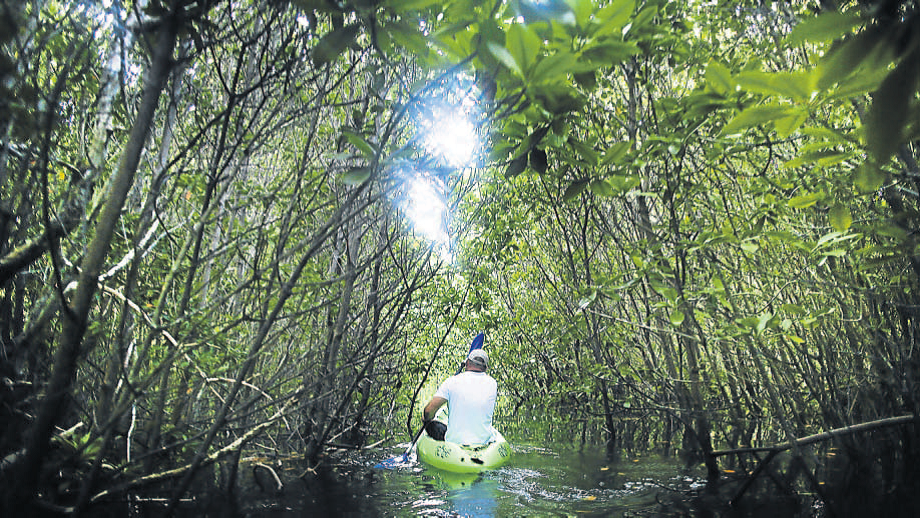 IF YOU GO . . . WHAT THERE IS TO SEE ON THE WAY: The journey, like the destination, is exceptional. We flew by helicopter over translucent ocean and islands to reach Quilalea. My previous helicopter flights have been in war zones in battered machines. This Eurocopter EC 120 was a luxury model with a windscreen that extended to our feet, giving us an unimpeded view of the coral reefs, forests and remote villages. Pilot Rondo Lehner flew smoothly, despite Marianne’s scepticism that he looked too young. But we landed gently on the tiny island and reset our watches to island time (one hour ahead of Mozambique), clocking out of reality. WHAT IT HAS: Quilalea has nine villas on the beach, five facing the sunrise and four, including the most exclusive clifftop villa, facing the sunset. The sunset villas, where we stayed, are hidden away with natural bush between them and a more private beach. Each villa has sunbeds on its verandah, wooden decks on the beach with loungers and umbrellas and hammocks under the trees. The villas themselves are airy and spacious, built with stone and coral walls and carved beams with a thatch roof and reed shutters (no windows). The oversize beds have mosquito nets which blow in the breeze, with a fan above them and air conditioner (with an eco-setting). The bathroom has a shower with shuttered doors that open up to the beach. The villas are exquisite but casual with an island decor and imaginative details. The valuables safe in the room, for example, is a wooden pirate chest. AND THE FOOD: If you like seafood, Quilalea will satisfy every whim. We had lobster and prawns on our first night, and regular dishes of fresh tuna, crab and other delicacies. Even the breakfast menu had options such as crab, supplemented by the fresh fruit and filter coffee. Homemade rolls were served with salads or light lunches and dinners were a feast. Starters included items such as spring rolls, the main course was usually fish of the day and a meat option with side dishes, and the desserts ranged from fantastic homemade ice cream to more traditional baked puddings. RATES: For South Africans, it’s R4 200 per person sharing per night. In low season, mid-January to June, it’s R3 000 per person sharing. A special family offer lets two children stay free with their parents. GETTING THERE: Airlink (flyairlink.com) offers direct flights between Johannesburg and Pemba in Northern Mozambique. Return flights operate daily except Tuesdays and Sundays and flight time is three hours. From Pemba take a helicopter transfer to the island with Archipelago Charters — the helicopter is based on Quilalea.