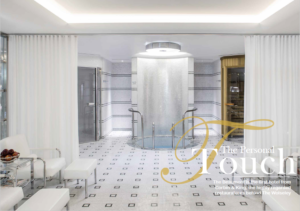 Opened only 3 years ago, Mayfair’s Beaumont Hotel, founded by well-known London restaurateurs Corbin & King, has won numerous prizes and accolades for “putting
the guests at the center of everything”, as renowned American hotelier Jeff Klein recognised.

Yes, it is ideally located in the very heart of London’s smartest district and, yes, it is impeccably designed in an authentic, detailed Art Deco style, but what really sets this
hotel apart is what Jannes Soerensen, its charismatic and ever-present General Manager calls “that personal connection”.

“What we want to offer at The Beaumont is all about dialogue and interaction, about providing an emotional, meaningful experience for guests.” “The Beaumont really is in many ways the perfect hotel. With only 73 rooms, we can offer service that is truly
personal, yet the hotel is big enough to be able to extend the sort of amenities and facilities people expect from a much larger property – a spa, a restaurant and bar, and a private residents lounge. All this in a beautiful art-filled building, located on a quiet garden square, yet within less than a few minutes’ walk from Selfridges, Bond Street and Mount Street.” 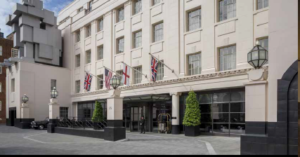 The human touch of real warmth and service is always hard to portray on a website or in a glossy brochure, but there is no doubt London’s Beaumont serves it up in spades. There is clearly a reason why the highly respected British Automobile Association named it the ‘Independent Hotel of the Year 2016/17’ for “its guest-centric team.. genuine
hospitality and engagement.” Not something you often receive from a robot.

A graduate of some of the world’s most iconic hotels, Jannes Soerensen arrived at The Beaumont in January 2016 via Le Bristol in Paris, The Connaught In London,
The Plaza in New York, The Ritz Carlton Hotel Arts in Barcelona, the Four Seasons Hotel George V in Paris and the Kempinski Hotel Adlon in Berlin. Since debuting as The
Beaumont’s General Manager at the beginning of January 2016, Soerensen has made a dramatic impact in a typically subtle, soft-mannered yet utterly dynamic and focused
way, which has led to The Beaumont, within only three years of opening, being named not only the AA Hotel of the Year – London 2016/17, but also the Catey Independent Hotel of the Year 2017.

Taking founder Jeremy King’s vision and Corbin & King’s deeply embedded values, he has propelled them a step further and created a customer-focused culture like never before. A very visible host, he can be witnessed meeting, greeting, following up personally with guests at all times.

Q&A
What kind of guests do you host at The Beaumont? Has
this changed since your launch? Is it changing?
Our guests principally come from the UK and USA, with a smattering from Europe – Sweden, France, Italy – South Africa & Australia. Inevitably they overlap with Corbin
& King’s loyal clients – principally from the worlds of the arts, theatre, film, publishing, advertising, legal and banking.

How does The Beaumont maintain its old-school Mayfair
character yet combine it with the latest technology and
comforts?

Behind its Listed façade, The Beaumont is a brand new building which could have given us the opportunity to introduce the sort of cutting edge hotel technology which could have meant no interaction between staff and guests at all – advance check-in on your telephone; robots to deliver room service; virtual concierge via a screen in the lobby. 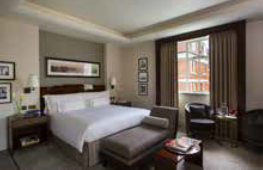 Instead, technology has been used to create a comfortable environment, but with human touches, such as windows that still open, heated floors in the bathrooms and conventional light switches rather than a computer console. We have an entertainment system that delivers the standards of home, with movies and television channels from all over the world, and the ability to connect your own personal devices to the system, so you can listen to your own music. Doors are opened with electronic keys, which still look like keys. We have the technology but it is an enabler, it is not the main show.

The Beaumont occupies a building by Wimperis and Simpson that was the first multi-storey garage to be opened specifically for shoppers; called Macy’s, it opened in 1926 and offered free parking for shoppers in Selfridges together with repair and service facilities, dining and rest rooms, and a room for chauffeurs. It also contained a car wash and turntable. In that sense, it was, for its type, already offering unheard of levels of luxury. 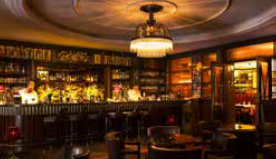 Classical in style, with a grand collonaded entrance, it was featured in the 1927 RIBA ‘Exhibition of Modern Architecture’ and was Listed as a Grade II Protected building by English Heritage. As with all Corbin & King projects, the interior design takes its cue from the building. The interiors of the hotel appear to have been restored to their former glory, retaining echoes from the different decades of The Beaumont’s life. They reflect a more European Art Deco aesthetic but with distinct, occasional references to North America.

They are discreetly glamorous and enriched by Art Deco features. 21st century luxury is evident in the attention to detail, which was an absolute rule – from the design of the ceiling cornice in the bedrooms to the tone of the lass bathroom tiles and the traditional bronze light switches. In most of the rooms, a sliding

timber door can be drawn across the bedroom area, providing complete privacy from the entrance door and bathroom area. The excellence of the artworks, with over 3,000 original pieces in the hotel, the sumptuousness of the materials chosen, the quality of the furniture, both that made to order and the antique pieces, are all second to none, and were all personally selected with a forensic meticulousness also found in Corbin & King’s restaurants.

The Beaumont founders Chris Corbin and Jeremy King
were originally restaurateurs but moved into the hotel
business. Is this a general trend? What do you see as other
trends in the global hospitality market?
When Jeremy and Chris sold Caprice Holdings more than fifteen years ago, their dream was to move into the hotel business but then they found The Wolseley first and that took up much of their time. The search for a hotel never ceased, however, and The Beaumont finally presented itself as the perfect opportunity. There are other restaurateurs that have moved into hotel-keeping – and it is not such a strange move. After all, both restaurant and hotels are ultimately about hospitality. So we see examples such as 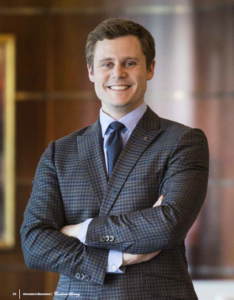 Michelin-starred restaurant with a few rooms (see Tom Kerridge and the Hand & Flowers, or Raymond Blanc at Le Manoir aux Quat Saisons), or Terence Conran and D&D, who have both opened hotels in London, or far larger, global groups such as Nobu and the Hard Rock Café.
There is another trend developing that is very significant for us at The Beaumont. All around us, large hotels companies are merging and consolidating, and with the impact of their loyalty programmes becoming diluted, and the top luxury travel agencies are seeing a strong consumer shift to individual, non-branded luxury hotels and resorts, which can only be good news for a hotel like The Beaumont. With close involvement of Jeremy King, who is such an integral player in London society, we are better placed than most to provide the ‘sense of place’ that travellers are seeking – a true connection to the location, without sacrificing comfort and luxury, with a sense of originality and individuality that big brands simply cannot conjure up in the boardroom.