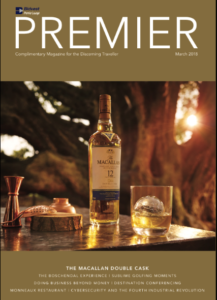 When commercial air travel first hit its stride, those with means were attracted to the fact that far flung destinations were suddenly accessible, and in a fraction of the time they had been previously. The Transatlantic flight from London to New York, for example, replaced almost a full week on a ship with just a day in the air. And the flight from Johannesburg to London – despite having to have multiple refuelling stops along the way – was still infinitely better than spending weeks at sea.

Nowadays, long-haul flights have become the norm, and, instead, the sign of true luxury is the ability to use air travel to cover much shorter distances – the kind of distances that would take you anywhere from 45 minutes to three or four hours by car. Because, let’s face it, these days, time is the ultimate luxury.

It is this proviso which is guaranteed to see “boutique” short-haul airlines growing in leaps and bounds. A prime example of this is Plett Air Safaris. 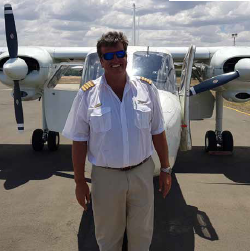 After many years spent flying commercial passenger planes, Captain Tertius Myburgh decided to swap the crowds at the likes of O.R. Tambo for the country charm of the little airports of Plettenberg Bay and Graaff-Reinet, as well as the bush landing strips of a host of private Eastern Cape game reserves, including Shamwari and Kwandwe. With Plett as a home base, Captain Myburgh and his staff operate a number of light aircraft on daily shuttles, transporting mainly game reserve guests to their bush holiday destinations.

The planes are small – think 10 passengers or less – but this has its perks.
Forget those awful buses at O.R. Tambo – you can just stroll across the tarmac to your awaiting plane. No more queuing for people to board, and no fighting over the window seats because everyone gets one! You also have the opportunity of not just seeing the cockpit – and the pilot at work – but you may be lucky enough to sit in it as an unofficial co-pilot.

That is just what I did recently, as Captain Myburgh flew a small group of us from Plett to Graaff-Reinet. Faced with the staggering array of buttons and dials, levers and switches, I quizzed Captain Myburgh about each one’s function, about how he navigates, and – most importantly – about how on earth he makes sense of the static-y instructions that come over the radio from the air traffic controllers. All questions I have long been dying to ask, and which Captain Myburgh answered with patience – while making his piloting of the plane look like a Sunday afternoon stroll. 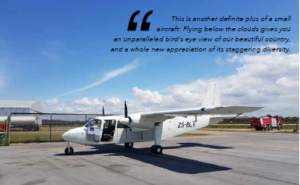 In between my cross examination, I gazed out the cockpit window at the ever
changing landscape below. This is another definite plus of a small aircraft: Flying below the clouds gives you an unparalleled bird’s eye view of our beautiful country, and a whole new appreciation of its staggering diversity. Which is exactly what I realised as we passed from the forested hills and blue coastline of Plett and over the plains and hills of the Karoo, to eventually land in Graaff-Reinet. 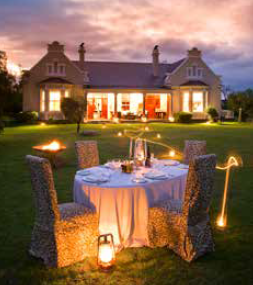 From here, there are a number of options to choose from. Head into town – perhaps for a stay at the beautiful Drostdy Hotel (www.newmarkhotels.com), housed in one of this historic town’s oldest buildings; or take a tour to the beautiful Mount Camdeboo National Park with Karoo Connections (karooconnections.co.za). Or perhaps head further afield to the little
town of Nieu-Bethesda, to see the eccentric Owl House. 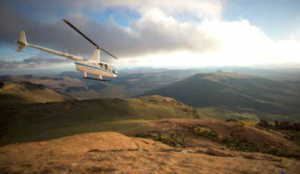 Samara Private Game Reserve
(www.samara.co.za) – made famous by its cheetah conservation project, and
more recently due to its fantastic aardvarksightings – is also a short drive away, or you could opt to continue living the life of luxury by signing up for a helicopter ride with FlyKaroo Air Services (www.flykaroo.co.za). As well as operating a number of flips over the area – where the staggering scenery lends itself to aerial sightseeing – they also do transfers to Samara, and more specifically to a hilltop where you will touch down to the very welcome sight of a fully laid out bush brunch and bottles of bubbly.

This really is the way to live. As is a night or two spent at one of Kwandwe
Game Reserve’s beautiful lodges or sole use manors (www.kwandwe.com). From there you can explore this lovely reserve, which happens to boast some of the best nocturnal animal sightings (bat-eared foxes, aardwolf, and even the odd aardvark) of any reserve I have visited. 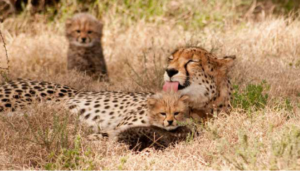 After a few days in the bush, Captain Myburgh winged us back to Plettenberg
Bay, where we flew low over the coastline and marvelled at the pods of whales
leaping below – these scenic flights are also a service of Plett Air Safaris.
When we landed, it was with a small tinge of sadness, not only because our
trip was over, but also because, thanks to the intimacy of the planes and the
one-on-one interactions you have with your pilot and the staff at each of these little airports, you do start to feel part of the family. And when it comes to
spending time with your own in these beautiful settings, it is invaluable to have those added hours of game viewing or sightseeing that a flight on Plett Air Safaris can provide. And that, ultimately, is the true gift of flight.

For more information and to book your flight on Plett Air Safaris, please visit
www.plettairsafaris.co.za.

Getting to Plett
Start your holiday off right by flying
directly to Plettenberg Bay on CemAir,
thereby negating the need to drive from
the larger airports of George or PE.
CemAir also offer convenient flights to
Hoedspruit, Bloemfontein, Margate, PE,
George and Sishen.
Please visit www.flycemair.co.za to book
your flight.