In the heart of Tanzania’s Serengeti, there is space to live in tented comfort and earth-friendly minimalism. 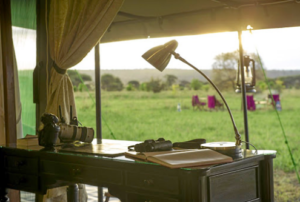 Fresh outlook: An inspiring open view of the Serengeti from the Kaskaz Mara camp

As the wind whips across the Serengeti, the sides of my tent  billow in and out like a wheezing old man.

The whole frame is creaking and groaning, and metal zip-ends are jangling. A hyena yelps somewhere close by and I grin, enjoying the wild sounds of Africa from my comfortable double bed in the bush.

I’ve finally developed an affinity for camping, as long as it’s in luxurious style like Tanzania’s new Ehlane Plains Camp, which manages the clever trick of luxurious unobtrusiveness.

Its eight tented bedrooms are delightful, with shiny wooden floors, big beds, a lounge area, a box shower like a Swedish sauna in the generous bathroom and a private deck looking out on endless bush.

Despite the comfort, the entire camp is remarkably minimalistic, with the bedrooms, a kitchen and the communal dining room, lounge and bar tent all springing up in four weeks flat. It feels far more earth-friendly than the usual game lodges built with deep foundations, bricks and concrete.

Ehlane is a permanent camp, but if it ever had to move, it could be gone just as quickly, and within months there would be no scars on the land to show it ever existed.

A home from home: Ehlane Plains camp combines luxury in a wild African savannah setting, in the heart of the continent’s world-famous Serengeti National Park. It is one of five run by Nasikia Camps, a company behind which is a love story of an Australian nurse and a dreamer from Tanzania.

The camp is the latest of five owned by Nasikia Camps, a Tanzanian company that actively supports the neighbouring communities. Each tent is handmade in Arusha using high-grade canvas imported from SA. A timber floor is added and topped with laminated wooden panels, also from SA.

All the furniture is crafted in the company’s dedicated workshop, and the décor is also sourced locally. Solar panels supply electricity and hot water, with fresh water driven in every day from the nearest town.

All the staff, including the guides, are Tanzanians and they rotate among the camps to stave off boredom and develop their careers. The one South African in the mix is Johann Lombard, a wildlife specialist who coaches and mentors the guides.

We set off one morning on a game drive through the rippling golden savannah. In a few weeks’ time, the land will be covered from horizon to horizon by wildebeest on the great migration, crossing Tanzania and braving carnivorous crocs in the Mara River as they follow the rains and vegetation north.

Some outliers arrive, with a few wildebeest plodding along in a neat row in the distance. We find lions, too, lolling around with their extended bellies almost dragging on the ground near the remains of a wildebeest hauled into a rocky outcrop.

The great migration can involve up to 1.8-million wildebeest on the move. There were more than 4-million 18 years ago, Lombard says, but there’s been a huge decline in the population because of poaching and controlled hunting.

We stop at a crossing point on the Mara River, one of 13 in the vicinity that the animals use year after year. A few skulls are dotted around as the remnants from last year’s migration melee, but it’s eerily quiet now and the water is low, not the raging torrent filled with danger that it will soon become. 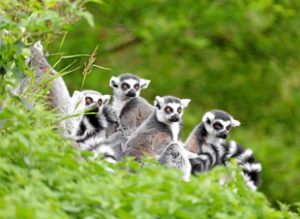 The hippos are becoming carnivorous too, out guide Eddie tells us. Lombard is fascinated by the carnivorous hippo tales, as he takes great delight in debunking accepted wisdom about wildlife.

The elephant isn’t related to the dassie, he insists, quoting Latin names and family trees. Other “facts” fly out of the window, too, as his encyclopaedic mind calls up intricate details about everything from birds to trees to insects.

Further north at Kaskaz Mara Camp we sit and watch a Marshall eagle with its wings hunched in a circle like a school-kid hiding his homework from classroom cheats.

The eagle is standing on a dead rock hyrax, and two tawny eagles are perched nearby, eager to steal its kill. It’s a waiting game, but the big boy is going nowhere and eventually the tawny eagles and the human audience drift away.

Kaskaz has 10 tented bedrooms and a tented main lodge, and again feels solid yet discreet. Both are so isolated that you arrive by light aircraft, landing at Kogatende Airstrip for Kaskaz Mara Camp in the northern Serengeti and at Seronera airstrip for Ehlane Plains in the central region.

The locations of the five different camps mean visitors can be placed nearest to wherever the famous migration action is happening at any time of year. Their remoteness also means that few other game vehicles are travelling the same dirt roads, heightening the sense of space and isolation.

At the camp we meet the owner, Donna Duggan, an Australian who worked in Tanzania as a volunteer nurse and met and married Naseeb Mfinanga 14 years ago. He was selling sandals in the street at the time, but together they set up a travel company, Maasai Wanderings, then branched into accommodation with Nasikia Camps.

Duggan was widowed in November when Mfinanga was one of 11 people killed in a Cessna crash near the Ngorongoro Crater. Despite the grief, she went on to complete Ehlane and is determined to keep the business growing.

“I’m not going to let Nas down. I was always the business side of things anyway; he was the dreamer, looking for new sites and dreaming up what sort of décor he should put in.

“This is my home and our kids have never lived anywhere else. I want to be here and I want to complete our story,” she says.

The staff were delighted, of course, as they had feared Duggan would pack up and leave her adopted country.

“I called a staff meeting and I said ‘I don’t fear the future, I don’t fear hard work but I need you all to keep going with me.’

“They were applauding and saying ‘this is what we were wanting to hear’,” she says.

• Stones was a guest of Nasikia Camps