Skip to content
Previous Next
Ehlane – The Greatest Wildlife

The greatest wildlife show on earth

Author :  Lesley Stones is a former Brit who is now proudly South African.

The annual migration of almost two million wildebeest across the Serengeti is the most spectacular wildlife show on Earth.

It’s an amazing sight, with animals filling the vast plains of Africa from horizon to horizon, following an instinctive, primal pattern in the Great Migration.

Walking for months as they follow the rains in search of lush vegetation. Dodging carnivorous crocodiles that hungrily lay in wait as they surge across deadly rivers. Giving birth on the hoof, and chivvying the new-born calves to keep up as they traverse the savannah. Prides of lions and stealthy leopards trail in their wake, picking off the weakest for the ultimate fast food takeaway. 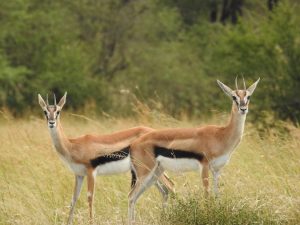 For tourists it’s not only an amazing spectacle, it’s also a bit of a gamble. If the rains come early, or late, the animals may be on the move and miles away from your carefully chosen safari lodge. If this is your once-in-a-lifetime trip, it’s a heck of a shame to miss it.

A clever way of avoiding that risk is to book with Nasikia Camps, a Tanzanian company that operates five tented lodges in various locations, so you can ask to be placed in the midst of the action at any time of year. Four sites are permanent, while Nasikia Mobile Camp literally packs up twice a year and moves in tandem with the herds.

Nasikia Camps is an offshoot of Maasai Wanderings, a tour operator that handles bookings and transport logistics, and developed its own accommodation to give guests a five-star experience. Between them these sister companies can organise a full safari with all the travel, guides and accommodation taken care of. 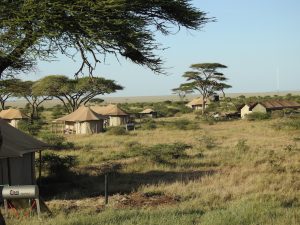 The gorgeous tents have evolved a long way from traditional camping, with wooden floors, en suite bathrooms, comfy double beds, lounge areas and private decks overlooking the rolling plains. It’s luxurious yet unobtrusive, delivering an excellent experience with a low environmental impact. The communal dining and lounge tents have settees facing the bush, and bars where you can hop on a stool and order a Gin & Tonic from the smiling barman. Absolute bliss!

Kaskaz Mara Camp in the northern Serengeti is close to the Mara River where the wildebeest brave the perilous crossing into Kenya. We set off one morning on a game drive and stop at a favourite river crossing point. It’s eerily quiet now and the water is low. A few skulls on the rocks are all that remain of wildebeest that drowned or were dragged under by crocs during last year’s migration. 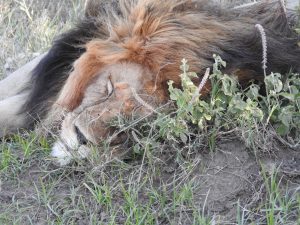 Soon this golden savannah will be covered by close to two million wildebeest and assorted zebra and gazelles. Already the outliers are arriving, and a line of wildebeest plods past us in a neat row.

Our guide drives us to a rocky outcrop where huge granite boulders thrust up into the sky. It’s a popular hangout for lions, he says, and he’s right. We spot one lounging on a boulder, then see another sleeping behind it. At the bottom of the rocks an older lioness scratches herself languidly, and a young cub delights us by climbing into a tree right in front of our vehicle. They’re all over-full and lazy in the late afternoon heat, with their fat bellies almost scraping on the ground. They’ve gorged on a wildebeest, and have dragged its carcass into the rocks so they can defend it from scavenging hyenas that will soon sniff it out 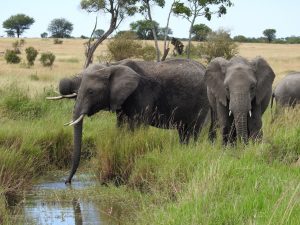 We watch them for ages with no other vehicles jostling for position like they do in busier safari zones. Eventually we drive away, thirsty for some sundowners, but we spot an old male lion fast asleep in a clump of bushes nearby. We drive on for a discreet distance before we jump out for wine and snacks as the sun turns the sky a beautiful blazing pink.

Kaskaz is so remote that I arrive in a Cessna operated by Air Excel, flying low over ancient volcanic craters and vast expanses of wilderness. Landing at Kogatende airstrip is delightful, since the only formalities are sipping wine served by the guides before you hop in a safari vehicle for the 90-minute drive to the camp.

Later I flew to Ehlane Plains Camp, a new site constructed in just four weeks in the eastern Serengeti. A brilliant attraction here is to sleep under the stars on a bed high on a platform draped with a mosquito net. If the wildlife sounds a little too wild in the night, you can quickly come down the stairs and zip yourself back inside the sturdy tent.

As you lie listening to the yelp of hyenas, the roar of lion and the whistling wind, you can’t help grinning as you fall asleep and wonder what the next day will have in store.

When to see the Great Migration 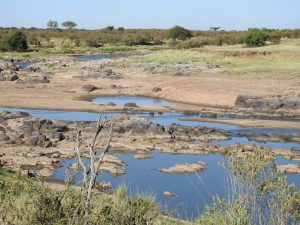 Close to two million wildebeest can be seen at any time of year if you’re in the right place, but catching them on the move is the ultimate goal. They gather in Tanzania’s eastern Serengeti in January, then move south to lusher plains in February to give birth. By April and May they’re heading north west, and by June as their calves mature the herds are moving at their fastest. In July they begin crossing the Mara River, which is most spectacular in August when the bulk of the beasts arrive. September sees the last of the river crossings into Kenya’s Maasai Mara. By October they’re moving south again, gradually drifting further down week by week until they cycle starts again.

Another great resource is Herd Tracker, a website and an app that shows the precise location of the herds using information from pilots who fly over the Serengeti, safari guides on the ground and Tanzania National Parks Authority. It also shows the nearest lodges and camps in Tanzania and Kenya, and offers a last-minute booking service.