“There are no rules or regulations; you can do whatever you want to. I call it unregulated freedom in the most geographically opulent place you could imagine.” 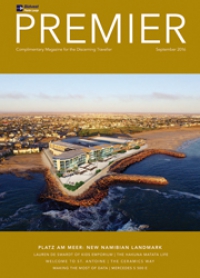 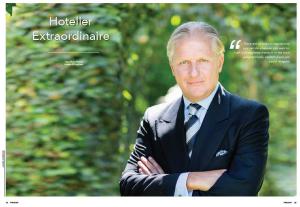 Earlier this year, Nihiwatu – a five-star retreat on a remote island in Indonesia – was named the best hotel in the world by renowned Travel + Leisure magazine. Sumba Island may seem a world away from South Africa, but in fact Nihiwatu owes a large portion of its success to the talents of Pretoria-born, Michaelhouse-educated hotelier, James McBride.

Introduced to travel at an early age, the hotel industry had always fascinated McBride. It was an easy choice then to study hotel management in Johannesburg, before moving to the United States in his early twenties to pursue a career which has seen McBride running some of the best hotels in the world, including The Grosvenor House of London’s Park Lane and The Carlyle in New York. McBride was working in Singapore as the global president of Asia’s YTL Hotel Group when he was approached by long-time friend, American entrepreneur Chris Burch, about the possibility of taking what had once been a small surf resort catering to surfers into a world-class boutique resort.

Three years of building later, and the resort boasts 33 individually distinctive luxury villas (including a tree house), a yoga pavilion, a chocolate factory, stables, and a spectacular spa located on its own private beach. And while it is undeniably Indonesian, there are touches of Africa, thanks in part to McBride, (who developed a love for the bush on their family farm in the Timbavati, which is now Ngala Safari Lodge), who says: “I find that the Sumbanese people are very tribal; they have swords and lobola, just like we do in South Africa. And coming in from the airport, the undulating hills, the children saying hello – it felt like Africa.” Gas lanterns, Land Rover transfers and “fire toast” all add to this feeling.  It is also indicative of just how Nihiwatu was conceptualised, as both McBride and Burch simply followed their passions.

“A lot of this wasn’t planned, it just evolved. Nihiwatu grew organically. The chocolate factory came up when we met Charly [an artisanal chocolate maker in Bali], and we thought of the tree house half way through construction because Chris loves tree houses. We were going to build a proper spa and then we got this incredible piece of real-estate and said, ‘Let’s create a spa safari.’ What would be the ultimate spa experience? If you had your own therapist all day, so that the massage would never have to end. Well, here, we could make all of that happen,” explains McBride.

It is precisely this kind of whimsical, unlimited thinking that makes Nihiwatu so appealing to visitors. “There are no rules or regulations; you can do whatever you want to. I call it unregulated freedom in the most geographically opulent place you could imagine.” Opulent is certainly an apt description, as guests are treated to sunset rides on deserted beaches, hikes through virgin rain forests, picnics next to thundering waterfalls and walks through patchwork quilts of luminous green rice paddies. But the secret to Nihiwatu’s success is it’s people – like McBride and Burch with the vision to create it; the professional staff who run it (including South African GMs Lorraine and Jason Trollip who have an impressive pedigree with Singita); and crucially, the Sumbanese people themselves who are arguably the hotel’s secret ingredient. 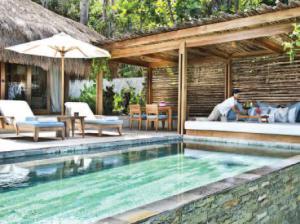 “The Sumbanese are delightful; they’ve got big hearts, they are amazing people and it’s a great pleasure to work with them,” says McBride. “Most people come to Nihiwatu for the waves and because it’s a beautiful place, but they come back for the people. The Sumbanese are what make the difference. The guests create a special connection with the Sumbanese and often that is the most memorable part of their experience here.” The Sumbanese are an undeniable part of the magic of Nihiwatu, and thus the hotel works closely with the Sumba Foundation, a philanthropic organisation that does admirable work on the island, treating malaria, and providing education and health care. “We do fundraisers in different parts of the world and most guests leave money when they check out. A big portion of our profits [about $700,000 a year] go to the foundation. It’s a big operation – there are a lot of people working in the field, digging wells, building hospitals, running feeding schemes. It’s a very important part of what we do and something we are passionate about.” 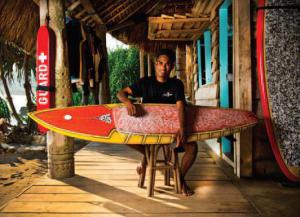 While McBride maintains that they are working hard to spread the good work of the foundation beyond West Sumba, where the resort is based, one thing they will not be growing is Nihiwatu itself. “We are remote and hard to get to. People will go the extra mile to come here and those who go the extra mile are usually cool people and they get along with each other because they are like-minded. So that whole ethos of the eco system of the customer here is a very big part of your stay, and we have no desire to build any more villas. The size and scale of the resort is just right. We have been building for the last three years, so now it’s time to just let it settle and really refine the experience.”

And refine it they have, with 24-hour butler service, superb cuisine, and a strangely soothing laid back luxury that makes you feel pampered and totally at home all at the same time. “You’ve got this extraordinary resort in a place that nobody had ever heard of… still many people have never heard of, that is just blossoming into this amazing flower. It’s been a remarkable journey from that perspective,” McBride says. Although this blossoming has not come without a lot of investment and hard work. “There were many dark days of thinking, ‘What the hell am I doing?’ None of this would have been possible without Chris Burch. There are very few investors in the world who would do something like this. He trusted me to do it and he’s passionately involved. A lot of times remote businesses run out of money, they never get finished, they cut corners and they inevitably cost more than you think they are going to cost, but you’ve just got to keep going, and Chris was willing to do that.”

It has been a gamble that paid off, though, especially for McBride, who left the comforts of structured employment to embrace a rather risky venture. “When you leave the corporate sphere and go off to do entrepreneurial stuff, people wonder where you are and it’s like you’ve just dropped out of life. Then, slowly, the wheel turns, sowhereas everyone thought you were crazy before, they now think you’re brilliant.”

McBride is not one to rest on his laurels, and laughs when I ask whether Nihiwatu is the pinnacle of his life’s work. “Chris and I would like to do more Nihi’s around the world – maybe in Nicaragua, Brazil, possibly even Mozambique. I think we’ve found a good recipe here. Nihiwatu is not formulaic, though. I never want it to be formulaic. So I think we will look to do something along the same philosophical lines as Nihiwatu, where there is an element of philanthropy and that feeling of unregulated freedom, but it will be unique to that place.”

In the meantime, praise and accolades continue to stream in for Nihiwatu as word of this incredible place spreads. “This has taken us all by surprise; we didn’t expect it. I think you can always have a vision but when it exceeds all of your expectations, that’s really special.”

Sitting outside McBride’s’ villa, we have just been treated to the most spectacular sunset. As the balmy evening falls, the last of the surfers are making their way in to the beach and the lanterns in the restaurant are being lit. “It really is beautiful here,” I say. McBride smiles and replies: “It doesn’t matter what you tell people about Nihiwatu, they won’t believe you. It doesn’t matter what you write, what pictures you put up, it’s very hard to explain. It’s a feeling, a vibe, you have to experience it first hand to really know what it’s like.” Follow their journey at www.nihi.com and on Instagram @nihiwatu.

For more information on this and other beautiful local and international escapes, please contact The Roving Ambassador on +27 21 426 0991 or visit www.theroving ambassador.com.