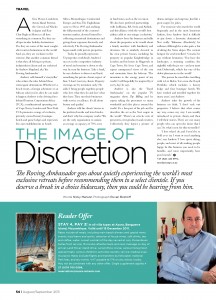 The Roving Ambassador goes about quietly experiencing the world’s most exclusive retreats before recommending them to a select clientele.  If you deserve a break in a choice hideaway, then you could be hearing from him.

Africa House, Londolozi, Azura Island Retreat, the Green Leaf Niseko in Japan and Ksar Char Bagh in Morocco all have something in common.  Yes, they are all spectacular holiday destinations.  Yes, they are some of the most sought after tourist destinations in the world.  And, yes, they are exclusive in the extreme.  But another common thread is that they all belong to private, independent clients and are endorsed by Andrew Shapland, aka ‘The Roving Ambassador’.

Andrew calls himself a ‘storyteller’ who relates the tales behind these extravagant destinations.  Whether it’s a beach resort, a foreign adventure or an African safari you’re after, he can make it happen.  Andrew is the driving force behind Tourism Corporation Africa (TCA), a multinational operating out of Cape Town, London and New York.  TCA promotes a range of exclusive, privately owned luxury boutique hotels and game lodges and represents five-star establishments in South Africa, Mozambique, Continental Europe and Asia.  The Englishman came to SA in 1993 and, realising the full potential of the country’s tourism market, devoting himself to collecting sensational destinations and giving them exposure discreetly and selectively.  The Roving Ambassador began small, with just six properties.

Today he proudly represents 53 properties worldwide.  Andrew’s success in the competitive industry of travel and tourism is down to the way he runs his business: ‘Like a bank’, he say.  Andrew is discreet and loyal, something his private clients expect of him.  ‘I don’t tout my clients.  Property viewings are by invitation only.’  He adds, ‘I bring people together, people who love what they do and love what they have.  They run their business with service excellence.  It’s all about beauty and quality’.

Andrew tell his clients’ stories to his preferred media and travel trades, and that’s why his company works: ‘We are the only organization to sustain an average occupancy of 70%, even in hard times, such as the recession.  We also have preferred partnerships with Lufthansa, BA, Swiss and Airlink, and this alliance wit hthe world’s best airlines adds to our unique exclusivity.’

Andrew loves his business and talks about the properties as he would about a member of the family : with familiarity and devotion.  He is similarly devoted to his own private houses, including his property in popular Knightsbridge in London and his home in Higgovale in Cape Town.  He loves Cape Town, and enjoys unsurpassed view of the city and mountain from his balcony.  ‘The mountain is the energy point of my world.  I will hopefully be inspired by it every day,’ he says.

Andrew is also the ‘Travel Ambassador’ on the popular TV magazine show, Top Billing, and he enjoys taking the presenters to many wonderful and elite places around the world.  It’s a fun part of his job and he describes the set as the ‘best soapie in the world’.  ‘There’s an eclectic mix of presenters, crews, producers and creatives.  Collectively they depict a picture of drama, intrigue and suspense.  Just like a great soapie,’ he jokes.

For someone who travels the world frequently and in the most luxurious fashion, does Andrew find it difficult to pin down a favourite destination?  Not really.  ‘Bahamas. Absolutely,’ he enthuses.  Although he is also quite a fan of skiing the Swiss slopes.  The current hotspot for avid traveler? ‘Croatia’ he says without hesitation.  ‘You have the landscapes, a stunning coastline, the nightlife with the jet set – and you must visit Dubrovnik, which has one of the oldest pharmacies in the world’.

The person he most likes travelling with is Liz Biden.  ‘Liz owns The Royal Portfolio, which includes a luxury lodge and four boutique hotels.  We have worked and travelled together for many years,’ says Andrew.

Andrew takes the growth of his business on faith” ‘I don’t seek out properties.  I believe that what comes my way, comes my way.  I am usually introduced to private clients, and then I tell their stories.  There are not many people who can open the doors that I can.’  So what’s next for this storyteller?

‘I love what I do, and I won’t be so bold as to say I want or need anything else,’ says Andrew.  ‘I love sport, skiing, people and most of all, making people happy.  In this business you need to be humble, and most importantly have good morals.