A FLOWER show that died out 20 years ago has been cultivated to make its mark on the conservation calendar again. 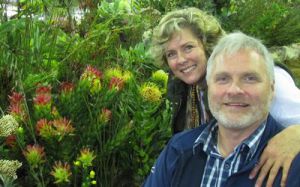 The Cape Floral Kingdom Expo is a labour of love and a drain on the pocket for Rudy and Marietjie Visser. But they hope that promoting the beauty and diversity of fynbos will increase conservation efforts and boost their dried flower business.

“We decided in 2013 to re-energise the show because there’s a heritage that we need to keep alive,” says Rudy Visser, MD of Floraland, the biggest private employer in Bredasdorp and the largest protea processing factory in the world.

“This is the industry’s flower show, not a Floraland show, but we took ownership because the heritage would be lost if we didn’t create an exhibition. It costs us money but nobody else stood up and wanted to do it,” he said.

The dormant Cape Floral Kingdom Expo was last staged in Cape Town in 1993 before reopening at the Mega Park exhibition centre in Bredasdorp, close to Floraland’s factory in the heart of the floral kingdom.

A fynbos mountain was created in the centre of the hall, built to recreate the natural habitat with paths around huge red Madiba proteas, colourful banks of daisies and impressive pincushion proteas.

There were snake displays, a 5km run, photography workshops and stands manned by organisations active in the fynbos ecosystem.

The Cape Floral Kingdom is a Unesco world heritage site and the smallest of the six recognised floral kingdoms in the world. It boasts more than 9,000 plant species, although 1,700 are in peril due to urban and agricultural expansion and invasive alien species.

FYNBOS thrives in poor soil and depends on fire to renew its growth by recycling the nutrients from old plants. Fire also stimulates dormant seeds to germinate, while some species grow fresh buds from fire-damaged trunks.

Conservation and commercial sales do not sound compatible, but they are if the strict rules governing the growth and harvesting of fynbos are followed.

Floraland is supplied by more than 600 harvesters who pick wild flowers growing across 800km. The factory covers 45,000m² and is engulfed in a rich floral smell. 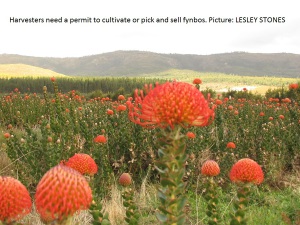 Some of the flowers, ferns, cones and seedpods are dyed, bleached, painted or dusted with frosting. Batches are placed in large wire crates and dunked into vats of dye that can contain up to five different pigments to get the exact colour customers require.

Delicate bunches are dyed by hand. Some are preserved in sulphur before spending four weeks in a drying room. Others stand in a mixture of textile dye, glycerine and water for several days to colour and preserve the flowers through the stem, leaving them feeling soft and natural.

More than 90% of Floraland’s output is exported, with 85% heading to Europe for the winter season. The majority goes to Catholic countries including Austria, the Netherlands, Poland, the Czech Republic and Hungary, where dried flowers are placed on graves for All Saints Day in November.

THE graveside tradition is dying out, so Visser is working to create new products. Dried flowers for Christmas decorations are an obvious market, as well as long-lasting displays for people who only have window boxes.

“We decided to be as innovative and market-related as possible so I spend a lot of time in Europe to understand what they need,” he said. “We can’t compete price-wise with India and China because they have cheaper labour, so we have to be more attractive with our flowers.”

Visser predicts that his cotton seedpods and ferns dipped in gold, silver and bronze metallic paint will be big sellers this season. Floraland supplies about 110 importers, wholesales and retailers, generating a turnover of about R150m.

Since most of the flowers used are harvested from the wild, it is essential that the raw material is treated with respect and sound conservation sense. Harvesters need a licence from Cape Nature to cultivate or pick and sell fynbos.

The Flower Valley Conservation Trust enforces sustainable harvesting rules of not cutting more than 50% of the flowering heads each year, and lists endangered species that cannot be picked.

“Fynbos is quite a small industry, but it is significant because it impacts directly on environmental issues and it’s grown in limited parts of the country, which is why it’s so important to monitor the practice,” says Kathy O’Grady, Flower Valley’s ethical trade co-ordinator.

South African National Parks (SANParks) also keeps a close watch on fynbos and the body has thrown its weight behind the industry and the flower show.

“Without SANParks there would be great difficulty in staging this flower show because everything is collected from within the parks,” says Johan Taljaard, park manager for Agulhas National Park.

“Our core business is conservation and part of our duty is to preserve fynbos. But you can’t expect the general public to have any feeling for it and contribute to its conservation if they don’t know about it and don’t start loving it.”

Park fees paid by tourists are a major component of its funds, so SANParks staff were at the flower show to explain their work and encourage people to visit. Rangers discussed the medicinal properties of the plants and a passed around magnifying glasses to show that the scrubbiest looking varieties are actually exquisite.

SANParks supports the fynbos industry because it is a renewable resource, Taljaard says. “Of course it needs to be managed and we have specific research projects looking at the sustainability of fynbos when it’s used by the flower industry.

“With a licence comes all the parameters and criteria, and it’s job creation in a country where we are very directly looking for jobs.”